This month it has been 60 years since the original U.S.-Japan Security Treaty from 1951 was revised in 1960. The treaty formulates the obligation the U.S. holds to defend Japan and that for that purpose it can use military facilities in its sole discretion. It was agreed that also afterwards Okinawa would keep its old conditions and shape. Okinawa counts for only 0.6% of the total size of Japan, while 70% of the U.S. military forces are stationed here. Whenever there is an opportunity, Okinawa prefecture emphasizes that it feels being treated unequally and discriminated against.
In 1978, a Status of Forces Agreement was signed between Japan and the U.S. that exempted the U.S. from any financial obligation, while making the Japanese side fully responsible for the expenses of the stationing of the armed forces. These costs rose in 2018 to the amount of 268.5 billion yen and are commonly known as omoiyari yosan. This because it is paid out of “sympathy” (omoiyari) towards the strange U.S. army forces that are not visible in other countries. The costs equal 152 times the yearly amount that the Japanese government invests in Okinawa to fight against child poverty. Yet, with the economic pressures caused by the U.S. military bases, the urgent environmental issues and the anxiety for war, for Okinawa it is noting than an obstruction towards betterment.

(In front of the gate at Camp Schwab)
From 9 a.m., 12 citizens participated in a sit-in protest. Yesterday was the third Thursday of action with 250 people present, which is a big difference with today. Unfortunately, the protesters were easily removed within 10 minutes. In the afternoon there were three rounds of deliveries made that brought in a total of 183 truckloads.

(In front of the Ryukyu cement pier in Awa)
30 members of the Uruma Shimagurumi movement divided themselves between the entrance and exit of the pier to protest. A positive outcome of the construction work being delayed was that until the Japanese Defense Forces came there were 3 or 4 people who came to warn the protesting citizens from the highway. Perhaps there were strict orders given by the officials in order to prevent the delays. Although a belt conveyer was damaged and the activities stopped for one hour, 501 deliveries were made by the cargo ships. 11 of the canoe members clinged on to the ships and were able to delay their departure with about an hour.

(Motobu Shiokawa pier)
The trucks directly loaded the earth and sand onto the pontoon as they always try to find new ways of operating. Today the landfill soil was unloaded onto the pier at once and reloaded on the cargo ships by the use of a crane. In the construction permit it is mentioned that cargo ships are being used, so this way of doing is a last resort to make achievements. It created the situation that close to half of the 27 trucks that were operating were waiting in order to continue to unload. 68 deliveries of landfill soil were made. 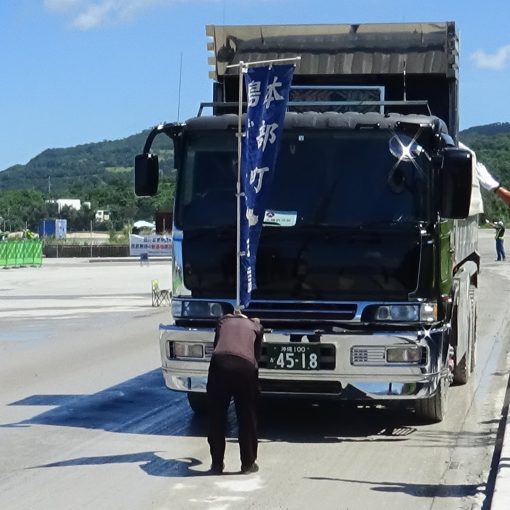 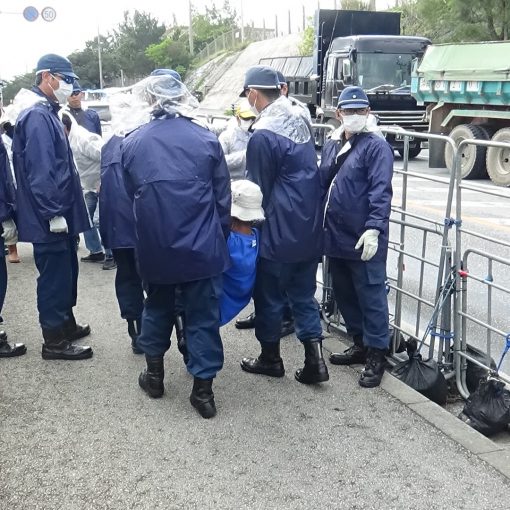