As the Diet session has started, the problems on the construction of the new base in Henoko have been revealed one after another. Although the Abe administration has explained to the U.S. government that the construction work is on track, the actual state is full of troubles. The Japanese government finally announced that the construction will cost 930 billion yen ($8.5 billion) and take 13 years. Experts doubt that these numbers could be attainable. It also became revealed that some members of the advisory committee of experts examining the soil improvement work had received large donations made by the contractors. In addition, there are many more issues to be faced with tough questions at the Diet including the change of suppliers of earth and sand from out of the prefecture to only within the prefecture and the huge security cost which consists of 18 % of the total construction cost. It is inevitable that this Diet session will become a big stake to the survival of the Abe administration, as they have been driven into the corner with the allegation against the issues of “cherry blossoms” and “IR.”

(In front of the Camp Schwab Gate)
At 8:30 am, only 16 people showed up for the sit-in in the cold air. As yesterday there were more than 100 people, the number of participants has drastically increased and decreased these days. However, despite only with small number of people, we will never be depressed, as justice is on our side. As soon as the riot police were lined up in front of us, people shouted against them. “Don’t get involved in the illegal construction work” and “Shame on you, an Uchinanchu (Okinawan),” they chanted. The riot police were just standing there without showing any emotions. In about 10 minutes, everyone was removed and concrete mixer trucks entered into the gate one after another. At 12:00 and 3:00, other convoys showed up. Totally 208 truckloads of materials were brought in today.

(In front of the Ryukyu Cement Awa Pier)
Approximately 40 members of the Naha branch of Shimagurumi (Island-wide Council) kept protesting at the entrance and the exit of the pier. As the trucks came from the both sides of the street, there was no time to rest and relaxed. Each time the signal changed, three or four trucks entered into the pier. Still they continued the protest whole day trying to delay the transport even for a second.

As for the canoe team eight canoes went out to sea and resisted by tying their canoes to the net under the pier. They successfully delayed the departure of the first vessel for about 30 minutes. 712 truckloads of earth and sand was loaded on two cargo ships and departed for Oura Bay. The picture shows a rainbow at the coast of Awa seen in the morning. Any auspicious sign?

(Shiokawa Pier at Motobu-cho)
No work as high waves prevented cargo ships from reaching the pier.

August 8, 2020 Ryukyu Shimpo Ryukyu Shimpo utilizes drones to report on U.S. military base issues in Okinawa, such as functional enhancements […]

February 7, 2019 Ryukyu Shimpo On February 6, it came to the Ryukyu Shimpo’s attention that the thickest layer of soft ground […] 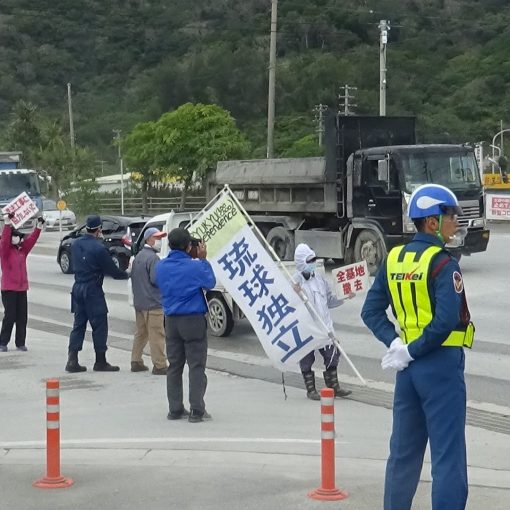 (In front of Camp Schwab Gate) The 3rd wave of COVID-19 is hitting us, and the anxiety covers Japan. The Suga Administration […]

(In Front of the Gate) Approximately 40 people resumed the sit-in rally from 9 a.m. including the members of Port Workers’ Union […]