March 22, 2020 Ryukyu Shimpo
On March 21, former members of the “Henoko” Prefectural Referendum Association, who directly petitioned for the holding of the prefectural referendum in February 2019 on whether residents supported or opposed the land reclamation in Henoko, Nago as part of the relocation of U.S. Marine Corps Air Station Futenma, held a meeting in Naha to discuss their plans going forward.
At the meeting, the members decided to petition the prefectural government to re-revoke the land reclamation permit on the grounds that the referendum result offers new grounds for revocation and to go on a nationwide tour visiting Japan’s other 46 prefectures.
They plan to meet with Governor Denny Tamaki soon and deliver a letter of petition to him.
Jinshiro Motoyama, who served as representative as the association, said, “respecting the result of the referendum must be discussed in more depth in Okinawa, and we must also see that the rest of Japan turns an eye back to the matter as well.”
The group’s petition will make five requests of the prefectural government: (1) to re-revoke the land reclamation permit at an appropriate timing, (2) to carry out a nationwide tour to the other 46 prefectures of Japan, (3) to carry out immediate action in Tokyo, (4) to cancel the Henoko new base construction and to have the Prefectural Assembly adopt a statement declaring that the relocation of U.S. Marine Corps Air Station Futenma outside of Okinawa or outside Japan should be resolved fairly and democratically on the basis of nationwide debate, and call for such nationwide debate, and (5) to request that the National Governors’ Association adopt the statement.
The meeting was attended by fifteen former members including representatives who called for the referendum to be held.
Regarding their hope that the prefectural government re-revoke the land reclamation permit on the grounds that the referendum provides new justification for revocation, members at the meeting voiced opinions such as, “re-revocation would have the effect of stopping the construction,” and “it would show a stance of moving forward together in a manner in line with public opinion and provide an opportunity for open debate.”
Regarding the action in Tokyo, members’ voiced opinions such as, “we can’t resolve the problem unless we gain the understanding of people all over Japan,” and “it’s important for people to recognize that there is a colonial arrangement [behind the concentration of bases in Okinawa].”
(English translation by T&CT and Sandi Aritza) 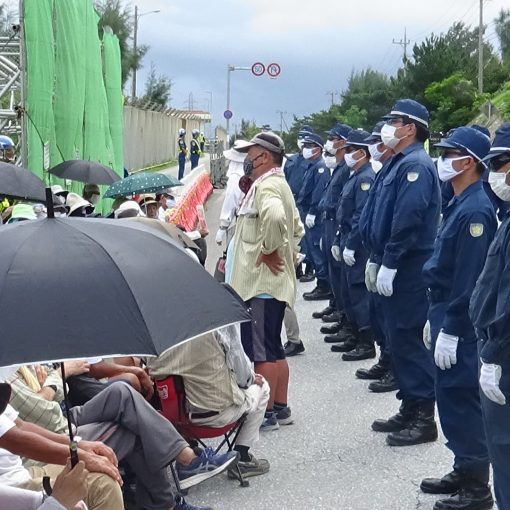 (In front of the Gate) An excellent weather with blue sky. At 9:00am, under the comfortable sun, 20 people resumed the sit-in. […]

An illegal activity of the Okinawa Defense Bureau (ODB) was found out again. A responsible person in the Okinawa Preferectural government says […]