On July 2, a research group (lead by Masaaki Tateishi, professor emeritus at Niigata University) reported their independent study on the ground in the Oura Bay. An earthquake of a seismic intensity of 1 or more could cause the seawalls to collapse because of the Oura Bay’s soft seabed. The research group pointed out that a portion of the soft ground named B27 extends nearly 77 meters below the ocean surface and may collapse if an earthquake with a seismic intensity of 3 occurs during the construction. An earthquake with a seismic intensity of 1 should occur after the construction is complete, it could collapse the seawalls because of their weight. The group analyzed the data published by the Okinawa Defense Bureau, applying the earthquake effects which the group independently assessed.

The research group is called “The Henoko-Okinawa Research Team” consisting of university professors specialized in geology. They have repeatedly pointed out the new base’s structural problems at Henoko/Oura Bay, such as the existence of 2 active faults at the construction site. As a Subcommittee on the U.S. House Committee on Armed Services has shown concerns over the soft seabed, the Abe administration will face more difficulty dealing with this issue than ever.

Today marks the end of 6 full years since the protest sit-in in front of the Camp Schwab gate started on July 7 in 2014. We have demonstrated our strong will of protest by supporting each other on rainy days and windy days, and in the freezing mornings and under the scorching sun.

The reclamation work which started in the winter of 2 years ago would have been supposedly finished in 6 years. However, the volume of earth and sand used is less than 3% of the total amount required for the land reclamation. The reclamation work has been delayed drastically due to the citizens’ protests. Also, the detection of the soft seabed and the active faults have made the new base’s viability questionable.

On July 6th, approximately 30 people joined the sit-in at 8:30 in the morning. “6 years passed by like a flash. I am so proud that the people of Okinawa have been united and kept working together. We’ll never give in. We will fight together until the government would abandon the plan,” Hiroji Yamashiro shouted loud.

A total of 229 vehicles delivered materials. As the work for raising the seawall started last week at the landfilled areas, they have increased the number of concrete mixer trucks.

A small group of determined people kept protesting against the dump trucks carrying in earth and sand at the pier’s entrance and the exit. Seven vehicles of GoGo Drive members joined in delaying the trucks’ move. They successfully trapped dozens of trucks inside of the pier grounds. The earth and sand of 1066 truckloads were loaded to 4 cargo ships, which departed for Oura Bay.

Nearly ten members of Uruma City showed up early in the morning. They stopped the dump trucks trying to bring in earth and sand until riot police arrived. Later they strolled inside the pier grounds to delay the loading work. Although the sunlight was strong, they took turns and kept continuing the protest. The earth and sand of 394 truckloads were loaded to 3 cargo ships. 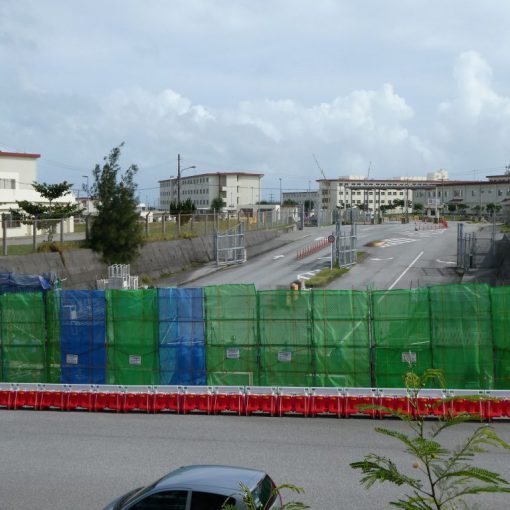