Approximately 20 people participated in the sit-in protest from 8:30 am onwards. Yesterday, the news came out that Camp Schwab found 11 new cases infected with coronavirus in the base, which stirred concerns about the virus’s spread inside the base. As the information released by the U.S. Army is limited, some argue if the number of infections might be higher than reported and if they cover up infected cases amongst the construction workers to proceed with the new base construction work.

The number of infected cases in Okinawa prefecture has steadily risen and exceeded over 3000 since the government launched the “Go-to-Travel” campaign. The confirmed cases per capita in Okinawa is the highest in Japan. Ironically, the campaign to boost the economy has invited greater coronavirus spread in Okinawa, the tourism islands.

The Okinawa Heiwa Shimin Rennrakukai (Okinawa Peace Forum) came in two buses with 25 people to join the protest rally. They marched around at the pier entrance, chanting slogans, “no new base construction!” and “do not destroy the ocean!” The riot police could not remove this large number of protesters quickly, so only one dump truck could enter the pier per one green traffic light. Nine canoe team members at sea clung themselves to a cargo ship and managed to delay two of their departures for about an hour and a half. Around 3:30 pm, the Japanese Coast Guard detained the canoe team members and forced them back to the shore. The protest action lasted for two hours longer than usual. On the beach, 30 protesters, including the Okinawa Peace Forum members, welcomed them with cheers and applauses. The construction work closed by 4:50 pm for the day, three hours earlier than usual.

Three cargo ships were loaded with 629 truckloads of soil and sand.

Six members of Motobu Shimagurumi (Motobu chapter of the Island-Wide Conference) rallied in protest, walking around slowly in front of the dump trucks. In the afternoon, the waves became too high, and the construction work stopped around 1:30 pm.

Four cargo ships were loaded with 384 truckloads of soil and sand. 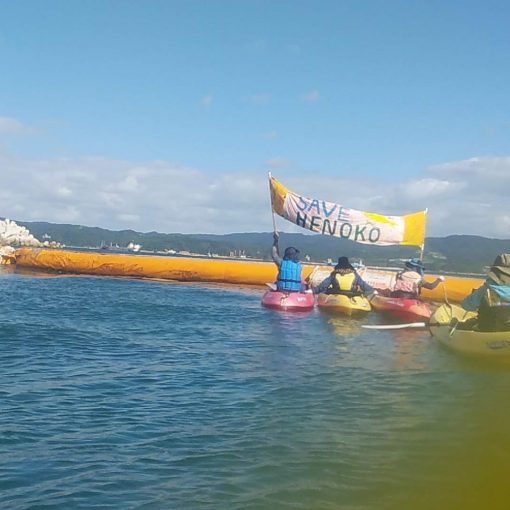