“Okinawa’s struggle on the edge of non-violence” discussed at Naha symposium 50 years after Koza riot, links to the present explored

In light of the upcoming 50th anniversary of the Koza riot on December 20, the editors of the quarterly journal “Nuchi Du Takara” held a symposium at the “Mizu Praça” in Naha titled “The Koza Riot and BLM: Underground Water Veins of Public Uprisings.” Around 60 people attended to listen to the talks and discussion by the panelists.

The panelists were Masaie Ishihara, Shinichi Isa, Akira Kimura, Yukio Hatoyama, Eriko Ikehara, and Shokichi Kina. Ishihara discussed the accidents and crimes by the U.S. military under U.S. rule after the war and changes in popular movements including the island-wide struggle against land expropriation.

Regarding the Koza riot, he said, “I am inclined to define it as a struggle of the people living in Okinawa at the borderline between non-violence and violence, only just keeping on the side of non-violence.”

Isa discussed the historical background from the Ryukyu Disposition to the present, and gave the analysis that “A characteristic of the Koza riot is that it was carried out against both Japan and the United States, and the physical actions involved in the Koza riot have roots connected to those of the direct action at the gate to the base in Henoko, Nago today.”

During the discussion, the panelists talked about such issues as the Koza riot and national security issues surrounding Okinawa. They also discussed the Civil Rights Movement in the 1960s and Black Lives Matter, and sought links between those movements and the Koza riot.

(In front of the gate) In a cold rain, from 7:30am, approximately 100 people gathered around the Gate and called out aloud […] 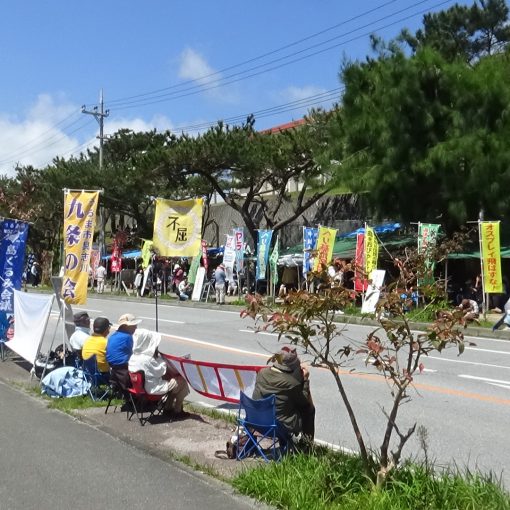 Takamatsu Gushiken (fourth from the left) of Gamafuya, a volunteer organization that collects the remains of those who died in the Battle […]