Takamatsu Gushiken (fourth from the left) of Gamafuya, a volunteer organization that collects the remains of those who died in the Battle of Okinawa, gathered with religious leaders to demand a stop to harvesting of dirt from Okinawa’s southern region – February 15, at the Okinawa Prefectural Office Press Club

Takamatsu Gushiken, representing Gamafuya, a volunteer organization that collects the remains of those who died in the Battle of Okinawa, along with the “Association of Religious Leaders Calling for Peace,” held a press conference at the Okinawa Prefectural Office Press Club February 15. The groups are demanding a stop to a plan to harvest dirt from the southern region of Okinawa’s main island for use in the land reclamation effort, which is part of the new military base construction in Nago’s Henoko neighborhood, calling it “government violence.” They also indicated a necessity for governor Denny Tamaki to inspect the site of the dirt collection.

According to a construction design change proposal submitted to Okinawa Prefecture by the Okinawa Defense Bureau (ODB), the plan is to procure around 32 million cubic meters of dirt from Itoman and Yaese, around 70% of the potential amount of dirt collected in Okinawa. It was noted that the southern region of Okinawa contains Okinawa Senseki Quasi-National Park, and that under the Natural Parks Law environmental exploitation is restricted. In Itoman’s Komesu neighborhood, contractors began in harvesting dirt without submitting a notification stipulated in the Natural Parks Law. At the instruction of Okinawa Prefecture, a notification was finally submitted in January of this year.

Prior to the press conference, the religious leaders met with representatives from the relevant prefectural departments. They demanded that dirt harvesting be stopped so that the collection of war dead remains could be started, and to prevent the environmental damage caused by the construction. They also demanded that the governor make use of an article in the Natural Parks Law that allowed him to ban environmental exploitation in order to protect the landscape. Zenji Shimada, a pastor at a church in Ginowan and leader of the plaintiff group that sued the government to stop the noise pollution at Futenma, criticized the plan, “I cannot stand for this ground to be used for a military base.”

Gushiken visited the Itosu Trench in Ishiski, Itoman with the religious leaders on February 14. He noted the fingers, bones, and teeth of children in front of the trench, explaining, “The collection of war dead remains has no end.” In order for Gushiken to show his intention to oppose the collection of dirt from the southern region, he plans on carrying out a hunger strike nearby. At the press conference on February 15, he said, “To use the ground filled with the blood of those killed in battle in land reclamation [for a military base] is a mistake on a humanitarian level. I believe that the remains are calling for us to help them.”

Also in attendance at the press conference was Atsushi Kitaueda from the Okinawa Citizens for Peace Liaison Council, who said, “In the southern region, you see 20, 30-meter holes from mining that were never refilled, and left in an awful state. It is clear that Komesu will also have its landscape destroyed down to its foundation.” 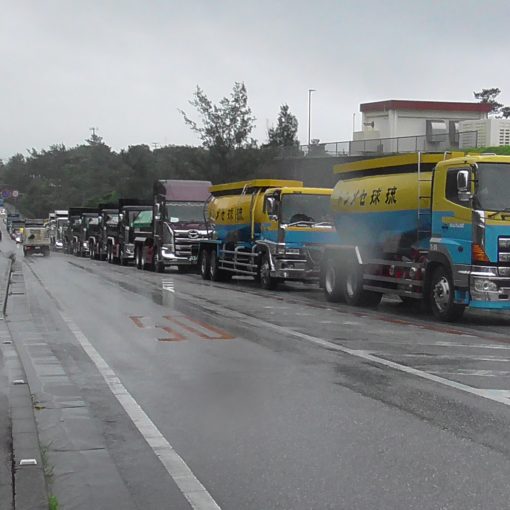 （In front of the gate） It has been raining for more than a week. It was also heavily raining this day from […]