The Okinawa Peace Support  is a General Incorporated Association* and was founded in July, 2017 to support the Okinawa opposition to the new US base in Henoko. Hiroshi Inaba serves as Executive Director. He was arrested with Hiroji Yamashiro at a protest against the new base and detained for more than 100 days. Currently, the Okinawa Peace Support has two other board members and operates two facilities which provide beds for protesters. They also exhibit photos related to Henoko Base and Takae all over Japan and occasionally abroad.  A photo book, “The Day When Takae Was Crushed”, was published late last year. The focus of the OSC is human rights and environmental issues on Okinawa, in order to make Japan and the entire world aware of the Okinawans’ struggles over the new Henoko Base.

(*In Japan, “General Incorporated Associations” are categorized as organizations who operate the business for public interest purposes. ) 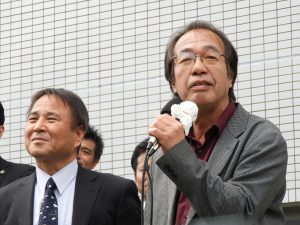