By Ryota Shimabukuro and Kenichi Yoshida

In Okinawa Governor Takeshi Onaga’s “Declaration of Peace” on “Irei no Hi,” signifying the 73rd anniversary of the end of World War II, the governor touched on the agreement to denuclearize the Korean Peninsula reached in the recent North Korea-U.S. summit, and renewed his demand that Japan rethink the new base facility construction in the Henoko district of Nago.

Prime Minister Shinzo Abe however, did not touch on the Henoko base construction issue in his address, but after the ceremony stressed to reporters that the relocation of MCAS Futenma would be a “reduction of burden [on the people of Okinawa].

On June 23, Abe indicated his intention that construction would continue, and with that “Irei no Hi” became the stage upon which the standoff between Okinawa and the Japanese government came into sharp focus.

According to people within the Okinawan government, the thing that the governor was particularly focused on for his “Declaration of Peace” was the activity pointing the Korean peninsula towards denuclearization.

In his declaration, Onaga criticized the continuation of construction at Henoko, saying, “It is not only the opposite of the easing of burden on Okinawa, it the opposite of the easing of tensions in Asia.” Okinawa’s top official further explained, “Even though the world is moving in this direction, why is the Japanese government refusing to change their stance and is continuing with base construction?”

At the memorial ceremony, Onaga commented, “My resolution to not allow the new base construction has not wavered in the slightest,” after which Okinawa Association of Bereaved Families chairman Tokumasa Miyagi said in his memorial statement, “As a descendant of the victims of war, I am vehemently opposed to both the desire to speed up the relocation of MCAS Futenma, as well as the construction of new base facilities which are connected to war,” which was met with thunderous applause. Many of the audience members were also descendants of the war dead.

The leader of the Liberal Democratic Party (LDP), which is the minority party in Okinawa, criticized Onaga’s declaration, saying, “Compared to last year, this year’s speech as too political. That type of speech is not suitable for a memorial ceremony.This needs to be addressed next week at the Okinawa Assembly.”

Meanwhile, a prefectural official stressed, “The governor has no intention of toning it down when it comes to Henoko. It is a display of his resolve.”

As the governor was strongly demanding that the Japanese government reconsider their construction plan at Henoko, Abe told reporters at a press conference, “Moving to Henoko will put the flight paths over the ocean, and aircraft will no longer be flying over schools or homes. This can be seen as both a safety measure and a reduction of the burden on Okinawa.”

Abe also stressed the government’s efforts to reduce the burden on Okinawan residents, noting the return of the West Futenma Housing Area as well as over half of the Northern Training Area (NTA), calling it the “largest return” of land since Okinawa was reverted to Japanese control.

However, Onaga countered with one particularly powerful statement in his declaration.

“Even 73 years after the end of the war, Okinawa, which accounts for no more than 0.6% of the total landmass of the country, continues to contain 70.3% of all U.S. military facilities in Japan.”

He stressed that the concentration of bases in Okinawa has not changed, and that it was clear there is a perception gap between Okinawa and the Japanese government on the meaning of “burden reduction.”

After the ceremony, a senior staff member of the prefectural governmen said, “There was just a stray bullet incident in Nago. The same things keep repeating in Okinawa. The Prime minister says, ‘We will be there for Okinawa,’ but the words do not reach our hearts.” 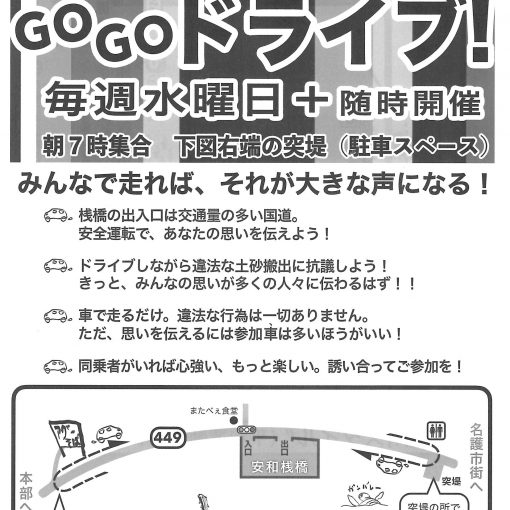 The volume of landfill soil and sand shipped from Ryukyu Cement Pier is increasing recently. We demonstrate in protest every day in […]