(In front of the Gate)
A little over 30 protestors of average age of 60 years vs. 50 young strong riot policemen. We knew that we could not win, but we called out aloud.
“Stop the landfill!”
“NO illegal construction!”
Mr. Nakamoto Koji, the leader of the group, spoke carefully to the riot policemen.
“Your duty is to protect the law, but you support this illegal construction. Think hard, please. If you do not protect the law, who would?”
I felt that his speech hit them where it hurts.
Mr. Migita Haruo who performed “Quit Abe Ondo” in front of the Pier in Awa yesterday, gave another performance here today. All through 20 minutes while we were being pulled out by the riot policemen, he sang for us, which gave us a bit of fun.

(In front of Ryukyu Cement Pier)
Only 15 people, a drastic reduction in number from yesterday, stayed protesting all day long. The truckloads delivered to the Pier was 503. Four carrier boats were loaded. More people in the passing cars waved at us to show their support.

(On the sea)
One boat and 6 canoes were out on the sea to protest and confirmed that dumping into the zone 2-1 and building N4 seawall were in progress. The zone 2-1 is almost a half filled. 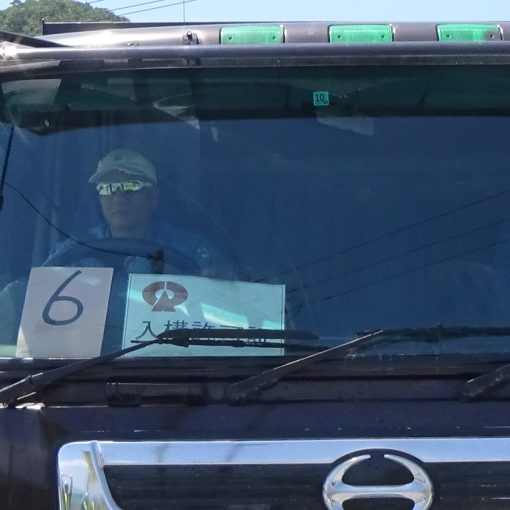 (In Front of the Gate) In the Morning, 140 protestors including the members of Medical Services Union and some groups from Tokyo, […]

(In Front of the Gate) Approximately 40 people resumed the sit-in rally from 9 a.m. including the members of Port Workers’ Union […]

（In front of the gate） In a drizzling rain, dozens of people continued a protest march. Protesters staged sit-down three times in […]