Approximately 40 people, including Shimagurumi Naha (Island-Wide Conference Naha), did a sit-in protest. Kazuo Senaga, the leader of the day, explained to the participants that to prevent COVID-19 infection, they should avoid unneeded contact with riot police and voluntarily move away after resisting for some time. The riot police started to persuade people to move, knowing that the protesters would move after some persuasion. Although some protesters tried to stay with persistence, everyone moved away in 10 minutes or so, and the gate got open.

Few people show up on Mondays. Approximately 15 people raised their voices protesting against the dump trucks at the entrance and the pier’s exit. As the trucks were coming from both sides of the highway, the protesters were busy dealing with them. The riot police repeatedly tangled with people to forcibly remove them.

They added 957 truckloads of earth and sand to the temporary storage site and loaded 259 truckloads to cargo ships.

Ten people, including the members of Motobu Shimagurumi (Island-Wide Conference Motobu), kept strolling in front of the dump trucks protesting from 7:30 in the morning. As no riot police were there to control the protesters, by a little past 9 am, there was a traffic jam of approximately 30 dump trucks. Riot police arrived from Awa right away. Through a surveillance camera inside the pier grounds, they should have known the situation right away. As the riot police work both for Awa and Shiokawa, they are busy.

By 5 pm, 489 truckloads of earth and sand were loaded into 4 barges. 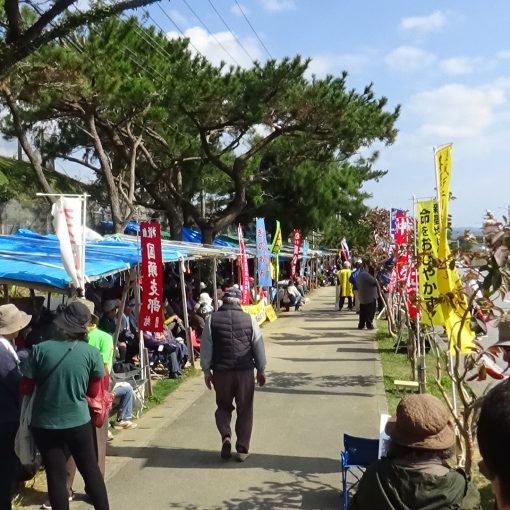 （In front of the gate） A mass rally was held, as usual, on the first Saturday in this month. It was determined […]