On Jan 21, the Fishery Division of Okinawa Prefectural Government announced that they turned down the Okinawa Defense Bureau’s application submitted in June 2020 to harvest coral specifically for transplanting.  The reason for the rejection was that as the current plan could not improve the soft seabed at the new base site, there is no need for the coral transplant for the construction project that would never finish.

The Okinawa Defense Bureau announced their objection against the prefecture’s decision and seemingly would file another lawsuit.

Regarding constructing a new base, the Okinawa Defense Bureau asked the prefecture to grant permission to transplant 35,350 colonies of small-size coral plus 21 colonies of large-size one. However, as a part of the colonies transplanted in 2018 died, experts have criticized the plan: there are very few possibilities for the transplanted coral to survive.

In the case of the latest application, the Okinawa prefectural government filed a lawsuit that the Minister of Agriculture, Forestry, and Fisheries violated the local sovereignty’s right because he put pressure to cut the approval process short and expedite the approval.

The court will decide on this case on Feb 3.

If they cannot transplant the coral, the construction of the base will get derailed. There is no doubt that the central government and the Okinawa Defense Bureau would try harder to recover their lost ground.

In response to the state of emergency issued by the Okinawa prefecture, All Okinawa Coalition has suspended its officially organized protest actions until Feb 5. However, nearly ten individuals voluntarily gathered in front of the gate as always. During the suspension, we expect voluntary individual gatherings will continue. If there are no protestors, the gate would be open all the time so that the vehicles could get in at any time to deliver the construction materials, which is known to us all. Therefore, we come even when there is no organized rally.

In three convoys, a total of 176 trucks delivered the construction materials.

In the occasional drizzling, ten members of the Okinawa Heiwa Shimin Rennraku-kai (Okinawa Peace Forum) kept protesting at the pier’s entrance and exit. Due to the halt of the official protest actions, no chartered bus service has been made available. So they managed to set up a carpool to get there together. To prevent dump trucks from entering and leaving freely, they kept standing in front of the gates all day.

Like yesterday, more than 1,000 trucks delivered earth and sand, and 669 truckloads were loaded to 3 cargo ships.

Under the drizzle, four members of Motobucho Shimagurumi (Motobu chapter of Island-Wide Conference) were the only protesters today. K-san, who participated in the actions every day, growled, “Despite the state of emergency issued, the Okinawa Defense Bureau has continued the construction work as if everything were normal. I cannot believe what a nerve they have. Do they think this is a good chance as the number of protestors would decrease because of the situation?”

They stopped the delivery work before noon. A total of 298 truckloads were loaded into three barges. 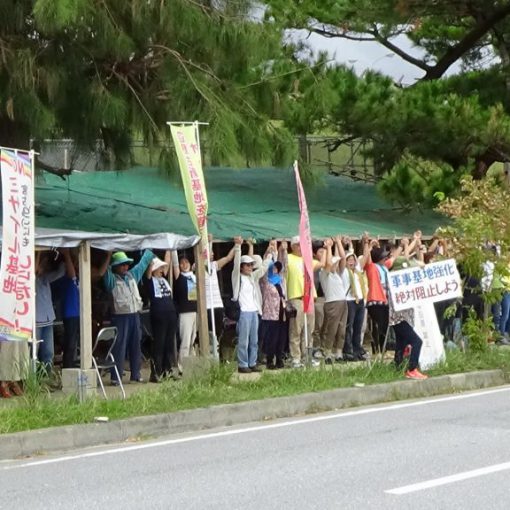 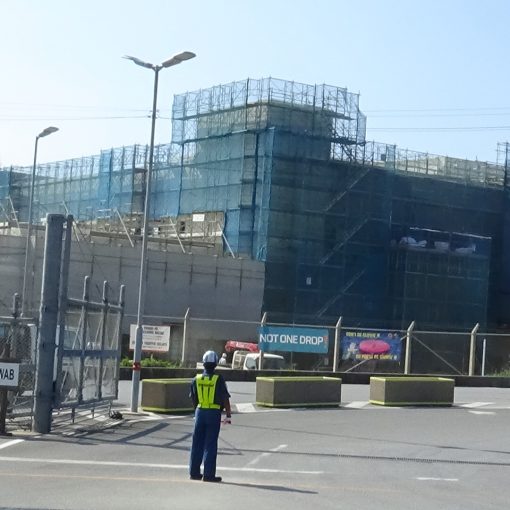 In the Camp Schwab, a variety of facilities are under construction while the land reclamation at sea continues at the same time. […] 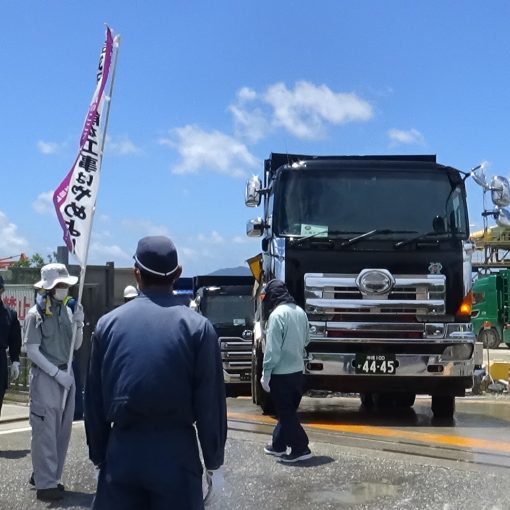