He cannot stop talking. The new base in Henoko brings many thoughts to his mind once he starts talking, from the base construction and human rights problems to the Asian situation. Gyoken Kuroyanagi (68) is a Nichiren sect priest with his dojo at Henoko. Committing himself firmly, he relocated from Yoron island to Henoko 8 years ago. “It has already been eight years. I was right to commit myself. The fight in Okinawa is the last and largest protest movement in Japan.” That is how he felt after having gone through the student rebellion in mainland Japan in the 1970s.

When he first appeared to our tent in Henoko dressed in a priest robe, we regarded him suspiciously. “Why does a priest come here?” “Do the funeral. Why political movements?” To our ridicules, he responded sincerely. “The first teaching of the Buddha’s Five Commandments is not to kill people, i.e., no war in terms of our time. I am only practicing the Buddha’s teaching and opposing the new base construction that leads to war.” We started appreciating his presence.

We have, through the protest movement, befriended various religious sectors, including Buddhists and Christians. Gyoken and his spiritual friends are furious at the administration’s plan to use the earth and sand collected in Itoman and Yaese for the Henoko landfill. “The area is full of the remains of Okinawan who died in the ground battle of WWII. It is out of the question to use such earth to landfill Henoko. We will not allow it. The administration has lost its mind and human dignity.”

Gushiken Takamatsu is an active volunteer to collect the bones and remains of the Okinawans. He and the religious sector protesters visited the prefectural officials in charge last week and requested not to permit the soil collection in southern Okinawa. However, the prefectural officials have been elusive, hiding behind relevant ordinances and previous case results. Gushiken and his friends could not wait for the prefecture’s response and decided on voluntary fasting to appeal directly to the Okinawa people. They plan to start fasting in front of the prefectural government office on Mar 1.

A friend of Gyoken has run the temple he constructed at Yoron Island. Gyoken’s dojo at Henoko has gotten leaks and forces him to move out soon. But he has no intention to leave “base construction that is against human dignity” behind. He said with a smile, “I probably will bury my bones in Okinawa.”

Low-flying training by the U.S. forces in various parts of Okinawa has plunged the residents into fear since the last year’s end. The Japan-U.S. agreed to maintain the flights above 150 meters high. However, the pictures show the flights were low and below the height of 100 meters, “It looks as if flying into the rock wall.” “I was afraid of the plane was flying toward my boat.” Some eyewitnesses claimed that it was the greatest fear they have ever experienced. In response to such claims, PM Suga commented in the Diet session on 17th: “flight training is important to the U.S. forces,” and “we request the U.S. forces to follow the agreed-upon rules.” It was one of the routine responses, and he did not say he would make a protest to the U.S. forces.

A U.S. soldier committed a sexual assault at the end of January. In Naha city early in the morning, a drunken marine approached a Japanese woman, took her into a parking lot, and forced himself sexually. When police officers arrived at the scene, he attacked them violently but was subdued and arrested. The incident reminded Okinawan of the murder-rape case in Uruma city four years ago. Needless to say, the recurring rape incident caused Okinawan women to feel chills through their bodies.

In the first part of February, joint training of Japan Defence Forces (JDS) and the U.S. Marines started at Blue Beach in Kin town. However, due to a carrier ship malfunctioning to transport the JDS troopers, the training scale became smaller. But the joint training will continue. In the middle of January, a secret agreement got exposed that JDS would station at Camp Schwab. Incidents are surmounting to ignore Okinawans and ignite Okinawans’ anger.

Despite the protest against each incident made by municipal governments, civic organizations for peace, and advocacy organizations for gender problems, no improvements or affirmative responses have made or come. How long more do Okinawans have to bear contempt and degradation?

From  Feb 4, the shipment, in terms of truckloads, was as follows. The number in brackets indicates the number of vessels. 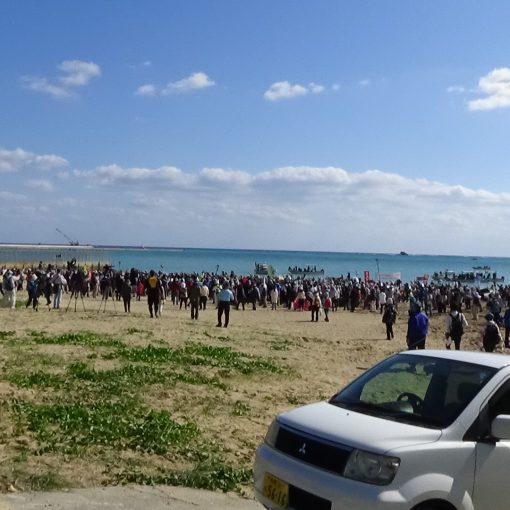