(In front of the Gate)
Due to the power outage last night, we could do nothing but wait for the voting result in the dark. Some went to the city to watch TV, while the others visited their friends to charge their cell phones. Every one of us was anxious to know the voting result which decides the future of Okinawa.
As soon as the voting result started to come in at 8:00pm, a telop that confirmed Tamaki Denny’s win came on the screen, much earlier than expected. Cheers seemed to pour out of the houses in the dark. He won by a large difference, 80,000 votes more than the opponent who was for the new base in Henoko.
From 9:00am, a celebration meeting was held at the Gate where the iron fences had been removed. Eighty people and many from the media gathered. Mr. Yamashiro Hiroharu, the leader of the “In Front of the Gate” spoke:
We are grateful to the late Governor Onaga for his commitment to oppose the construction of the new base at Henoko. We pledge that we continue to stand firmly against the new base.
Big cheers came up in response.

Today is the final day of the five-day campaign. Anticipating that empty trucks might arrive during the night, 5 of us decided […] 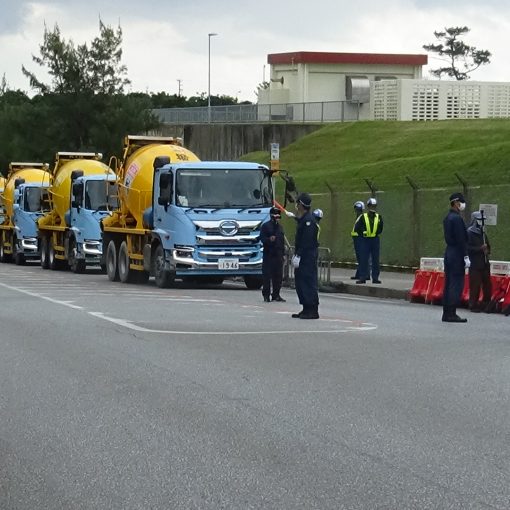 (In Front of the Gate) In a drizzle, 13 people resumed the sit-in. To the mixer cars and dump trucks that deliver […]