(In front of the Gate)
At 9:00am, 19 people resumed the sit-in to protest in front of the Gate for the construction vehicles. The green nets that had covered the Gate fences were removed, which gave a good view inside the Gate. It also opened up a good flow-through way for autumn breeze.

Expecting the imminent event to follow in the next week that the Minister of Land, Infrastructure and Transport would cancel the revocation of the landfill permit and that the construction would be resumed, the participants’ speeches were tinged with anxiety to face the crisis.
At 10:30am, 50 people gathered about the Tent and listened to Mr. Arime Masao whose parcel of land was confiscated after the War for the use of the US military base. He survived the War in the Island of Saipan when the Japanese army chose an honorable death rather than surrender. After returning to his homeland, he has been fighting to regain his parcel of land confiscated by the US military forces. Backed by his own experience, his talk was forceful and drew our attention. Absolutely there should be no more war. 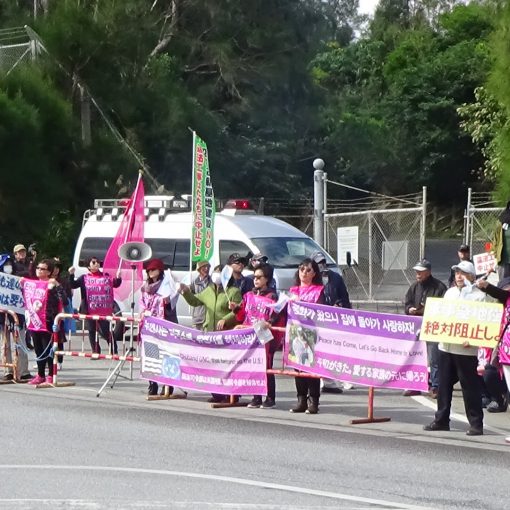