A dugong swimming calmly through the waters off the coast of Kayo, Nago City in March 2008 (photograph taken from helicopter)

A dugong (specimen A) known to inhabit the waters off of Kayo near the construction site of the Futenma Replacement Facility (FRF) in Henoko, Nago City, has not been spotted in over two months. On November 28 the Okinawa Defense Bureau (ODB) reported this at a meeting of the Environmental Oversight Committee. The ODB reported not noticing construction affecting the dugongs, due to traces of dugong grazing observed in the seaweed beds where they feed. An expert speculated, “Won’t they come at night to feed, since the construction is noisy during the daytime so they cannot live in Oura Bay?”

In Okinawa three dugongs (specimens A, B, and C) have been confirmed within the last 15 years or so, but since construction started two of these specimens have not been spotted. This will likely become a new basis for Okinawa’s argument that FRF construction affects the environment, which Okinawa employs in its confrontation with Japan concerning revocation of the land reclamation permit.
Right after construction in Henoko commenced specimen C went missing. In August, the Okinawa Prefectural Government (OPG) used the disappearance of specimen C as one of its reasons for revoking the land reclamation permit.

Upon receiving word that specimen A could not be located, the OPG’s Henoko Base Construction Countermeasures Division made the statement, “The prefecture’s claim is being substantiated further.” The division also expressed awareness that when the OPG goes to court over revocation of the land reclamation permit, the missing dugongs will be used as a factor in the OPG’s argument about the importance of stopping construction in Henoko.

However, the ODB does not recognize that the lack of dugong sightings is due to construction. In response to an inquiry from the Ryukyu Shimpo, the ODB stated that a survey in the Kayo sea area showed 25 signs of feeding in October and 17 signs of feeding in November, and explained on this basis that “The dugong is using the feeding grounds.”

The ODB stated that the results of the dugong call survey it is conducting in addition to the feeding survey are still undergoing analysis, and emphasized that “At Environmental Oversight Committee meetings, committee members advise us that it is necessary to consider the matter comprehensively based on all survey results.”
However, Director Taro Hosokawa of the Dugong Network Okinawa feels dread for the dugongs. He pointed out that in ODB surveys up to this point specimen A’s habitat was said to be moving gradually out to sea and away from the land reclamation area. Hosokawa suggested, “Isn’t it taking refuge away from Kayo due to the construction noise during the day?” Compared to the other two dugongs, specimen A seems intent on inhabiting the waters off of Kayo. If it strays too far into unfamiliar waters there is concern that it could be caught in fishing waters.

Hideki Yoshikawa, who aids the dugong lawsuit in the United States, views it as problematic that the environmental impact assessments performed by the US military and ODB recognized that there were dugongs living in the Kayo waters and that they still assessed, “Construction will not affect them.” Due to how the dugongs disappeared once construction began, Yoshikawa expressed his intent to substantiate this as a claim in the lawsuits concerning land reclamation permit revocation and the dugongs.
(English translation by T&CT and Erin Jones) 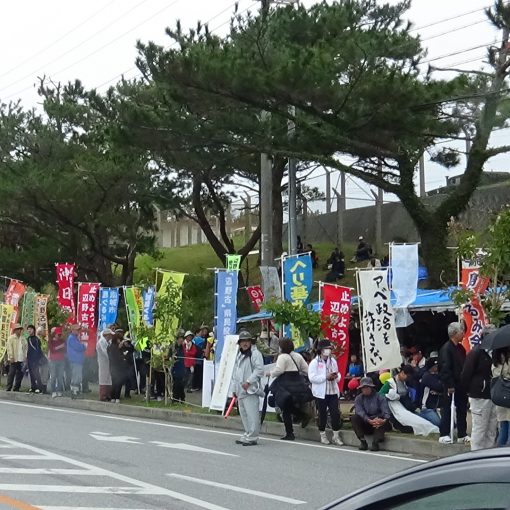