(In front of the Gate)
At 8:30am, approximately 30 people resumed the sit-in. Three times today, a total of 114 truckloads of landfill material were brought in.
A participant from Yokohama told us his experience in the Philippines, “I told the people of the Philippines that many Okinawans were killed by the US soldiers during the War II in the battle of Okinawa Islands and that nowadays the violent crimes committed by the US soldiers and the US military plane crashes are oppressing the people of Okinawa. They were very perceptive because they had suffered the same problems caused by the US military bases in the Philippines.” His speech was welcomed by a big applause.
The picture shows the protesters exercising calisthenics before being removed from the protest site. The protesters being removed. The protesters being detained in a detention site on the sidewalk. The maximum number of the detainee was 70.

(On the Sea)
Due to a bad weather, all protest activities on the sea were cancelled.

The tyranny of the U.S. military looking down on Okinawa has never stopped. On Oct 29, U.S. forces enforced parachute drop training […] 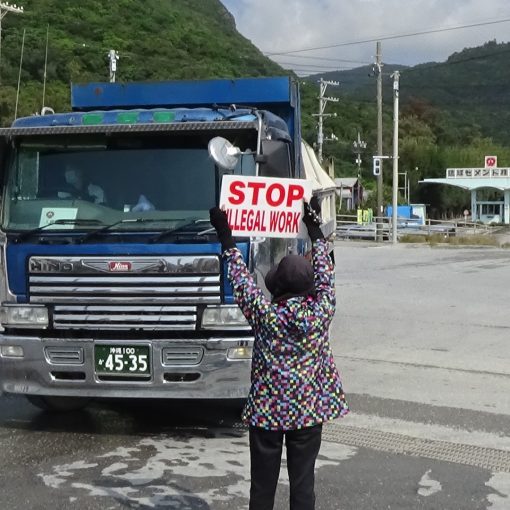 (In front of the Gate) At 9:00am, approximately 20 people started the sit-in. Twenty-three students from Chuo University in Tokyo joined the […]