(In front of the Gate)
The meetings rallying against construction of the new base in Henoko are receiving more attention and support after the Prefectural Referendum. The 1st Saturday Intensive Action meeting in March was held in front of the Gate. Approximately 1300 people gathered holding banners and flags which gave lively colors to the scene. Messrs. Inamine Susumu and Takara Tetsumi who are the co-leaders of All Okinawa and some Diet members gave speeches criticizing the Administration.
“The Prefectural Referendum has reconfirmed the will of Okinawa people. The Administration must stop the construction immediately!”
“The soft seafloor will bring the construction to halt. The construction of the new base of which schedule and cost are not determined should not be executed.”
In the afternoon, “The Meeting of the Handicapped in Henoko” was held. The wheelchair users and others who have difficulties in participating the protest rallies expressed their support. A man with hard of hearing received a large clapping.
“Everyone is entitled to his unique opinion, but I believe that the future of Okinawa is in the process of change now. Everyone should speak up his own thought.”

(On the sea in Oura Bay)
Under the sunshine like in the early summer, 3 boats and 8 canoes went out on the sea to protest and confirmed that no work under way on N4 seawall and that depositing dirt and sand into the designated landfill area was in progress. The canoe members called out to the workers in several hundred meters away through a loudspeaker in Okinawa direct.
“Go slowly to be easy on yourself!”

(In front of Ryukyu Cement Pier)
No delivery of dirt and sand today. 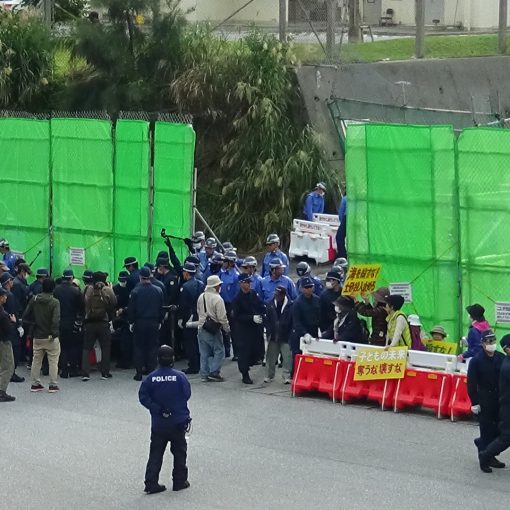 (In front of the Gate) Three times today, a total of 259 truckloads were delivered. Awaiting tomorrow, the day of impending start […]