An act that restricts drone flights near the designated facilities including the U.S. military bases was implemented on Sep 6. Until now, local media and citizen groups have taken aerial photos showing the construction of the new base. They checked the pictures and found disputable construction issues and expressed strong objections against the Okinawa Defense Bureau. However, because of the flight ban within 300 meters from the designated areas, news-gathering activities will be severely restricted.

In addition, as it is required to inform and obtain permission for flying drones from the base commander and the local police, the controversial problems of base construction would be consequentially hidden from the eyes of the citizens of the prefecture. The Diet had a hot debate over the Act, and the concerned experts and lawyers have issued a statement disapproving of the Act.

Masanori Okuma of the Okinawa Drone Project, who has flown their drone several times this year, was asked by a police officer to show his ID in one occasion.

“From now on, the police will decide whether the drone is in the regulated area. It could lead to a mistaken or arbitrary arrest,” Okuma is concerned. The photo (taken on Sep 3) shows the current state of the landfill, as seen from the Henoko side. The Okinawa Drone Project estimated: the reclamation completed about 90% of the area (2)-1 in the back, while 50% in the area (2) in the foreground. In (2) -1, the additional seawall construction is currently underway to raise the terrain’s height to 4 meters.

On Sep 6, All Okinawa Coalition resumed their protest actions. They had suspended the protest since Aug 22 due to the concern about the spread of the COVID-19 pandemic. On the third day after resuming the official rally, nearly 40 people in rain gear gathered in front of the gate for the first time in a long while. Facing the sudden resignation of Prime Minister Abe and the start of solicitation of public comments on a design change for Henoko’s new base submitted by the Okinawa Defense Bureau, Hiroji Yamashiro, Chairman of Peace Okinawa Center, made a powerful speech. “The political situation is in turmoil, but let us move forward with a firm belief. We will win if we don’t give up,” Yamashiro said.

A total of 62 large vehicles, including concrete mixing trucks, brought in construction materials.

Due to the typhoons and the traditional Bon holidays, two weeks passed with no landfill works. Although the transportation of the earth and sand began in the afternoon of the day before yesterday, there was no loading onto the cargo ships. Still, the dirt and sand piled up onto the temporary storage area on the pier grounds. The reason seems to be that there were no empty ships available, and the coal ships monopolized the berth. Under continuous drizzling, about 30 members of Shimagurumi Kaigi (Island-Wide Conference) Uruma City chapter continued to protest at the pier’s entrance and exit. They sang songs and raised a voice of protest to the dump trucks. Mr. Miyagi, the representative of Shimagurumi Uruma chapter, said, “We resumed the rally again. Continuously keeping to raise our voice of protests will corner the government. We have no choice but to do our best. “The total of 546 truckloads of earth and sand on the 7th, 714 on the 8th, and 755 on the 9th were brought in.

No sign of resuming work at all. No carrier for earth and sand has left port for more than 2 weeks since August 21. 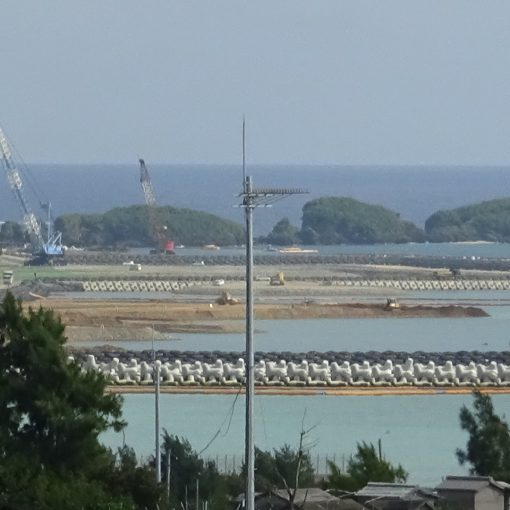