(In front of the Gate)
Three times a day from the morning through the afternoon, 291 truckloads in total were delivered today. Each time when approximately 100 large trucks line up on the national highway #329, it causes traffic congestion. While the riot police removes the protestors, the traffic congestion reaches over 1km, but the police force does not attend to the situation. They could direct the general traffic to use the remaining lane to ease the congestion, but does nothing. It seems that the police force awaits for the criticism to come against the protest by intentionally leaving the general traffic lost in a traffic jam.
The police in charge of the site ignores our plea to “direct the traffic for ordinary citizens”.

(On the sea in Oura Bay)
One boat and 7 canoes were on the sea to protest, but did not go over the floats. Because the work site was near N4 seawall and close to land and a little too far to reach.
Hirashima area has changed a great deal. The beach is covered with more rocks than sand now. It seems that N4 seawall built in the North of Hirashima has changed the current and washed away the beach sand. The protest rally closed by noon.

(In front of Ryukyu Cement Pier)
Although small in number, the protest rally continued all day long in front of the gate to the Pier. Unlike yesterday, truck traffic continued without a break today. In the morning over 300 truckloads and 270 truckloads in the afternoon were delivered. 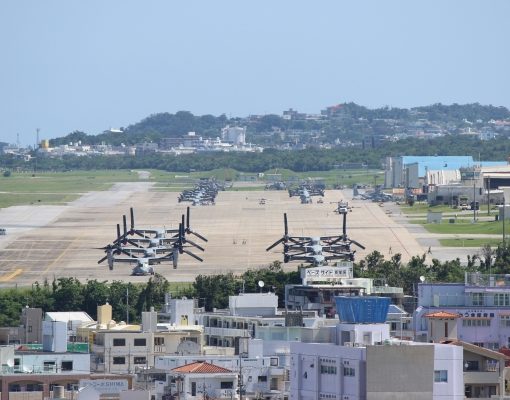