March 14, Ryukyu Shimpo
Shocking data has once again indicated just how dangerous U.S. Air Force Kedena Air Base’s aircraft noise is, along with just how inhumane the current base operations are.
It is estimated that 17,454 residents from the Kadena Air Base area suffer from severe sleep deprivation. In addition, it is estimated that annually, 51 people develop ischemic heart disease and 10 people die as a result of the noise pollution.
Hakkaido University Professor Toshihito Matsui calculated and published the abovementioned figures, which were based on the guidelines on noise pollution that were published last October by the World Health Organization (WHO) Europe Region.
Assuming that the effects of the ground-level noise pollution within the flying grounds would be large, he included engine adjustments and taxiing into the estimate.
There had not been a solid measurement method for the effects of the ground-level noise pollution within the flying grounds.
He created an even more precise noise pollution contour, or distribution map, that took how the noise pollution branches out, topography, and buildings.
He then calculated the number of people affected and risks by noise pollution level.
The criteria for the effects of noise pollution on health by the WHO or WHO Europe Region have been published six times starting with the first criteria established in 1980.
In 1999, guidelines indicating the threshold values in which health issues arise were announced.
It pointed out that chances of cardiovascular diseases increase in areas that suffer from severe noise pollution.
In last year’s guidelines, it mentions heart diseases, hypertension, and diabetes.
These have also been shown in research findings from areas other than Europe and these standards are universal.
The 1999 guidelines were published the year following the appealed court ruling of the first Kedena Air Base noise lawsuit.
The focal point during the said court ruling had been impact on health, but the Fukuoka High Court Naha Branch would not recognize it as they were “unable to draw a conclusion.”
While further emphasis was placed on proving the impact on health, the case was turned down during the verdict of the first hearing in 2005 since “a causal relationship between noise pollution and health problems could not be recognized.”
Similarly in the 2009 appealed court decision, the Supreme Court rejected the final appeal. The government and judiciary have ignored the WHO guidelines.
In the third lawsuit, Professor Matsui testified as an expert witness in line with the WHO guidelines and emphasized the impact on health.
The first ruling in 2017 finally but partially recognized the impact on health. In addition to nuisance and sleep deprivation, it recognized the noise “leads to increased risk of adverse effects on health, such as hypertension.”
But this still remains far from the WHO standards.
Up until now, the judiciary has not permitted a ban on U.S. aircraft flights at night and in the early morning.
This is due to a “third party act theory” where the “government cannot restrict the operations of U.S. military aircrafts.” In addition, they also claimed “the security treaty which is highly political in nature does not fall under judicial rule” in the name of “political question.”
The appealed court decision for the third lawsuit is to be delivered this coming September.
Now that the impact on health that can danger one’s life has been made clear more than ever, we would hope the judiciary addresses and bans flights. We would like to strongly call into question these “third party acts” that appear to take precedence over the lives of the people.
(English translation by T&CT and Chelsea Ashimine)

(In Front of the Gate) Tuesday, after the long national holidays, construction of the new base was resumed. From 8:30 a.m. approximately […] 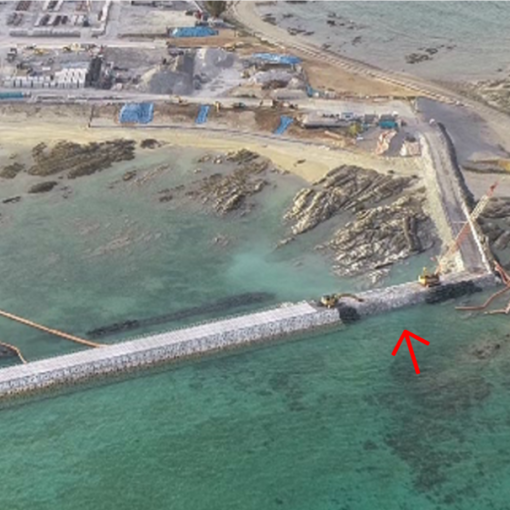