(In front of the Gate)
At 9:00am, dozens of people resumed the sit-in, but were removed in 15 minutes by 40 riot police men, and placed in a temporary detention area on the sidewalk. Until the trucks are lined up and ready to go through the Gate without obstruction, for about one hour they routinely keep us in the detention area.
While they kept us in the detention cage three times today as usual, 271 truck deliveries were made into the base.

(On the sea in Oura Bay)
Only one boat went out on the sea for monitoring and confirmed that cranes moved blocks to K8 seawall and built sidewalls of the seawall. In the zone 2-1, dump trucks transported from K9 dirt and sand, and depositing work went on all day long. Three months have passed since the start of depositing dirt and sand. The zone 2-1 is approximately 4% of the total area to be reclaimed (160 hectares). A half of 4% has been filled.

(In front of Ryukyu Cement Pier)
Although small in the number of protestors, we rallied to dump trucks all day long, and waved at the passing cars. Many drivers waved back. I get the impression that more people willingly expressed their will, maybe because they feel more confident having known that majority votes of the Referendum said NO to construction of the new base.
The picture shows a mound of “red soil” that has been left on the Pier because the Prefectural government found it illegal. 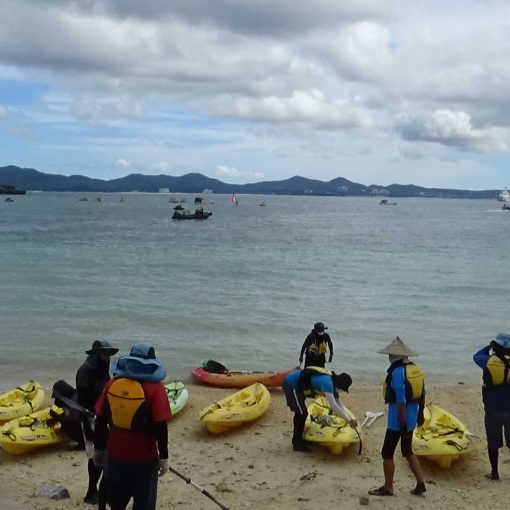 The tent in front of Camp Shwab, which welcomes the protesters, measures 80m in length. Takemasa Kinjo(63) built a large part of […]