(In Front of the Gate)
The number of people participating in the protest rally has been increasing slowly. In the national political scene, non-ruling parties decided to unify in supporting one candidate in “one candidate district” in the election of House of Councilors pending in July to overthrow Abe Administration. The major issues of the election will be the new base in Henoko in addition to the constitution. Five years ago, the new base in Henoko was not even an issue in a national election, but now it is a big issue on the national level, and the number of people visiting Henoko is increasing.
Today, over 40 people joined the sit-in rally in the morning to protest, and the number of participants peaked 90. Many walked in sidewalks carrying placards and showed their protest in various ways.
Under the hot sun like in the summer time, we sat 3 times singing and calling slogans aloud.
Mixer cars and dump cars, a total of 224 made deliveries to the base today.

(On the Sea in Oura Bay)
A windy day, two boats and 4 canoes went out on the sea. Earth and sand were being deposited into the zones 2-1 and 2. We confirmed that a rock called “Schwab Rock” was covered by a net. The Defense Bureau claims that the net was placed to prevent seabirds (terns) from nesting.
A captain of the protest boat criticized.
“Terns used to lay eggs on Schwab Rock for breeding, but nor more since the construction began. Placing a net over the rock to prevent from laying eggs indicates their attitude of disregards to environment and living creatures.”
Due to increasingly strong wind, we stopped rallying.

(In Front of Ryukyu Cement Pier in Awa)
All day long, a small number of people rallied. By 2:30 p.m. 489 truckloads were delivered.

December 14, 2019 Ryukyu Shimpo Does the Japanese government consider Okinawans as Japanese? Their extreme arrogance fill us with these doubts. December […] 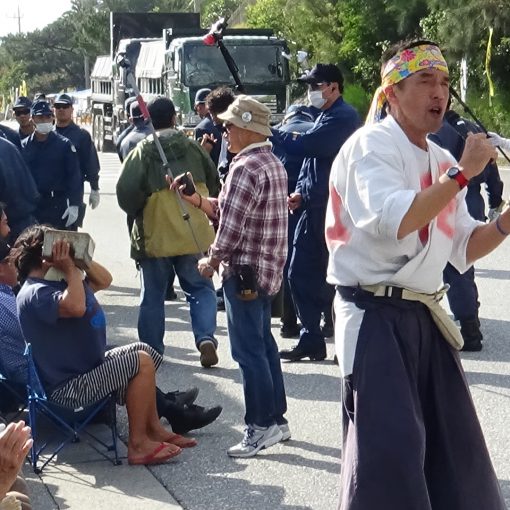 (In front of the Gate) A little over 30 protestors of average age of 60 years vs. 50 young strong riot policemen. […]