Shipping out from Awa and Shiokawa has been accelerated, but we found on 8th that landfill in Henoko is more than a year behind the schedule. Landfill in Henoko began 2 years ago in December. Since the water is shallow in this area, landfill was expected to complete by the end of August this year. Howeber, due to consecutive tayphoons and political turmoil over the election to fill the governorship vacated by late governor Onago, landfill work was interrupted many times. Also the persistent protest by the citizens played a big part in delaying the landfill work. Lnadfill completion of the plot #2-1 shceduled by the end of March was delayed to the end of July and #2-2 from the end of Ausgust this year to September next year. The plot #2-1 is currently 90% completed and #2-2 20% completed.

In the landfill work in Hinoko, the runway needs to be elevated 9 meters above the sea level. Kitaueda Tsuyosi, a civil engineer has pointed out: “one year may not be sufficient to complete. At this rate, it may easily take 2.5 years, which means cost increase”.

(In front of the Camp Schwab Gate)
Approximately 50 people, max at a time, rallied in the sit-in protest. When women are in charge, they really pep up the rally. They kept on singing in protest even while being removed from the line of protest rally. Civilian security guards are wearing masks now that COVID-19 is more prevalent.
The protestors rallied in front of the gate chanting slogans aloud in chorus after every delivery was made. 179 truckloads were delivered during the day.

(In front of Ryukyu Cement Awa Pier)
Approximately 20 people kept on rallying at the entrance and the exit of the pier. Six cars of GoGo Drive campaign joined to obstruct the trucks coming out of the gate and successfully slowed down truck traffic.
619 dump trucks made deliveries, and 982 truckloads were loaded to 4 cargo ships.

(Motobu Shiokawa Pier)
Eight members of Shimagurumi of Motobu Town protested all day long. They have developed a unique style of protesting, so-called “Shiokawa style”: to bow ceremoniously three times in front of each truck. They kept on bowing throughout the day requesting to stop transportation.
399 truckloads of earth/sand were loaded to 3 cargo ships.

In order to estimate the volume of earth/sand used in landfill work, we had assumed one truckload was 6 tons. However, following advice given by media and civil engineering experts, we changed the assumption to 5 tons per truckload. Consequently, the estimated amount of earth/sand dumped is changed greatly. The estimation calculated on the basis of the number of ruckloads serves only as a reference. 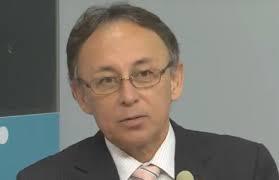 January 6, 2020 Ryukyu Shimpo A charity concert was held on Jan. 5 by actress Sayuri Yoshinaga and musician Ryuichi Sakamoto at […]