This year’s Okinawa Memorial Day marked the 75th anniversary since the end of the Battle of Okinawa. The Okinawa Prefectural Assembly held the annual memorial day service to honor the war-dead on June 23 at the Peace Memorial Park in Mabuni, Itoman City, where the final and bloodiest battle of the war was fought. During the memorial service, Gov. Denny Tamaki delivered a peace declaration: “We must earnestly find a way to keep the war memory alive. I hereby declare my dedication to making Okinawa the center of peaceful interactions, so as to fulfill its role in actualizing world peace. Thereon, our nation can take pride in its pacifist, non-nuclear principles and come together with people from all over the world.” Just as with the previous year, the governor read parts of the peace declaration in the Okinawan language and in English.

Photograph 2: Akane Takara reads Anata ga Ano Toki, her poem dedicated to peace, during the Okinawa Memorial Day ceremony at the Peace Memorial Park in Mabuni, Itoman City, on June 23, 2020.
In his peace declaration, Gov. Tamaki pointed out that even today, 75 years after WWII, 70.3% of all U.S. military bases in Japan are concentrated in Okinawa, while it accounts for 0.6% of the total land area of Japan. Tamaki argued that Okinawan lives continue to be heavily impacted by accidents and incidents caused by U.S. military personnel, and by environmental issues such as water pollution caused by U.S. military bases.

The governor spoke on Nago City’s Henoko/Oura Bay, where the new military base is currently under construction; he called the waters a “hope spot,” inhabited by over 5,300 animal species (of which 262 are endangered). He underscored the importance of “Thinking responsibly about how to preserve our abundant oceans and forests for the future generations.” He then commented on how the novel coronavirus pandemic wreaked havoc as rising anxiety and discrimination polarized society: “This shows how people around the world can benefit from accepting each other’s positions and differences, and from cooperating and trusting each other. It will allow us to have a peaceful heart and lead a truly rich life.” He declared, “Now is the time to rid of all nuclear weapons and wars, and place our utmost efforts into building lasting peace.”

The United Nations prepared a video message for the Okinawa Memorial Day service for the first time. Izumi Nakamitsu, the United Nations Under-Secretary-General of Disarmament Affairs, said in the video: “75 years after the Battle of Okinawa, tensions between certain global superpowers are on the rise. The world’s security environment has deteriorated; some call it a new cold war. On one hand, multinational cooperation is required in solving global issues such as the novel coronavirus pandemic, climate change, and sustainable development. On the other hand, foreign affairs can be multi-polarized and complex, and there’s a recent trend to downplay international frameworks and norms.” She concluded, “Now is the time for disarmament.” Nakamitsu further said, “The people of Okinawa overcame the tragedy of the Battle of Okinawa; they spent their lives rebuilding the islands from the ravages of war and building peace. Passing down their passion and their successes to the next generation, and working towards world peace is the way to honor the fallen.”

■ Hiroshima and Nagasaki mayors’ messages
Also for the first time, Hiroshima City Mayor Kazumi Matsui and Nagasaki City Mayor Tomihisa Taue prepared video messages for the memorial service. Both cities were destroyed by atomic bombs during WWII. Mayor Matsui called for lasting world peace and said, “Civil societies need to shift to sharing this common value that an ideal world is one without war or nuclear weapons.”

Due to the coronavirus pandemic, Prime Minister Abe, the chairs of both houses of the Diet, and some of the cabinet ministers were unable to attend the service this year. Prime Minister Abe said in his video message, “The atrocious warring shall not be repeated again. [We] resolve to keep this vow, build a peaceful world full of hope, and continue to persist in such efforts.” The Prime Minister then promised to make progress on reducing the military base hosting burden placed on Okinawa, however, refrained from commenting on the Henoko base construction.

After Gov. Tamaki’s peace declaration, Akane Takara, 17, a senior student at Shuri High School, read her poem dedicated to peace, titled Anata ga Ano Toki (literally: you at the time). Takara incorporated tragic stories told by WWII survivors into her poem. She is dedicated to “creating a peaceful world.”

Visitors arrived early in the morning to pray before the Cornerstone of Peace (Heiwa no Ishiji), a monument located inside the Memorial Park inscribed with the names of 241,593 people who lost their lives during WWII. Visitors mourned their fallen family members in the intermittent rain and wished for lasting peace. This year’s memorial day service was scaled down due to the coronavirus pandemic, and only 161 people attended, according to the organizers. 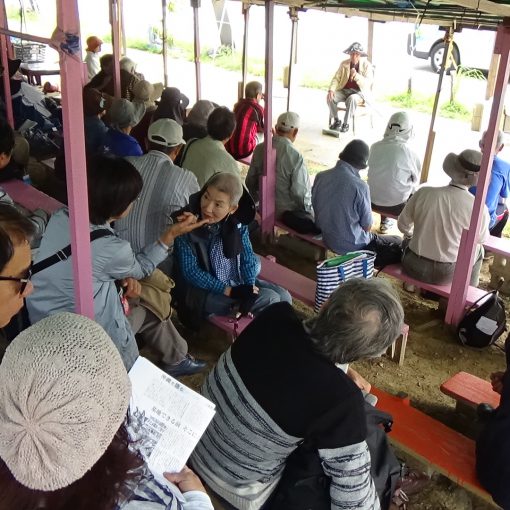 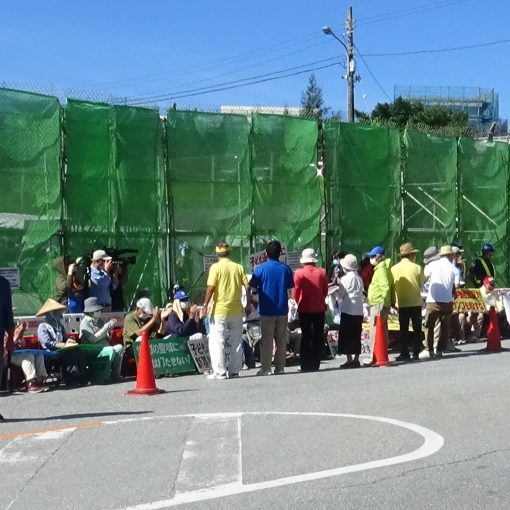