“How much is a canoe? Where can I buy it?” The support of Henoko by Chiharu Yamaguchi started in 2014 with this tweet via SNS. A comment from her friend who has participated in the Oura Bay protest started the ball rolling, “our canoe is over ten years old and dilapidated.” Chiharu promised her friend that she would donate a new canoe. A response came immediately and was followed by another, which resulted in the donation of two canoes.

The “Canoe Donating Group for Henoko” caught the attention of a wider circle of friends from the start. One of the supporters sent in a monthly contribution. A donation came from Mexico via a friend. She was impressed by an offering of pocket money by an elementary school child. Her mother wrote: the family enjoyed the beautiful sea during their visit to Okinawa. The child learned about the big brothers and sisters protesting against the landfill for a military base and offered to give up her monthly allowance to send to the protesting brothers and sisters. Some people collected donations at live street performances and by selling badges and stickers.

“Remarkably, I often receive thanks from the donors, who appreciate the opportunity to show their concern on the new base issue and participate in the protest without actually coming to Okinawa,” says Chiharu.

The group has expanded its support, not limited to Henoko but included a group to protest the helipad construction in Takae.

In the Chibai City , Chiharu works in a hospital that provides hospitalization services for covid-19 patients.  The hospital staff is worried about in-house infection and not free to have meals or conversations among colleagues. Chiharu says that she is working for long hours every day under stressful situations and unable to go to Henoko. However, I am sure she is tweeting in her mind what she will donate next.

For measures against coronavirus infection, both protestors and the police have avoided actions triggering “plucking out” the sit-in protestors.

Persuasion by riot police to the citizens to move and citizens’ resistance against the authority continued for a while. After 20 minutes or more, they could finally clear the protesters and open the gate.

This day, Defense Minister Kishi visited Okinawa and inspected the construction site in Henoko, by a helicopter, from the sky. He saw the construction site, but he should have visited the protesting site in front of the gate to feel the residents’ formidable resistance. At any rate, he must have no such intentions because he is a member of the Suga Regime that prioritizes the national policies over the residents’ voices in Okinawa.

A total of 271 vehicles, including concrete mixer trucks, delivered the materials.

About 30 citizens continued the protest, divided into two groups at the pier entrance and exit.Many dump trucks entered the pier by taking a left turn this day, which left one traffic lane with dump trucks in the queue of nearly 100 meters long. A leader of the riot police, H, who controls the site, treats the citizens violently. He repeated oppressive words and actions using a handheld microphone by calling individual names and criticizing the rally.

I expect that H’s behavior, deviated from the Police Act, will come to an issue sooner or later (A newspaper posed a question on his behavior the next day).They suspended the loading of soil and sand in the afternoon without a stated reason. It seemed that there were no empty carriers available.

They loaded 284 truckloads of earth and sand into one cargo ship.

Twenty members including Motobu-Cho Shimagurumi came to protest. They continued the protest, holding a placard and walking in front of the dump trucks that incessantly came. The riot police arrested a woman in the afternoon because she had allegedly used violence against a riot police officer. A moving picture shows that two riot police officers held her tight not to move for a long time, and she was struggling to escape from their tight grips.  They say that she bit the finger of one of the officers, but who used violence first?

A total of 461 truckloads of soil and sand was loaded into four sand carriers with a grab bucket. 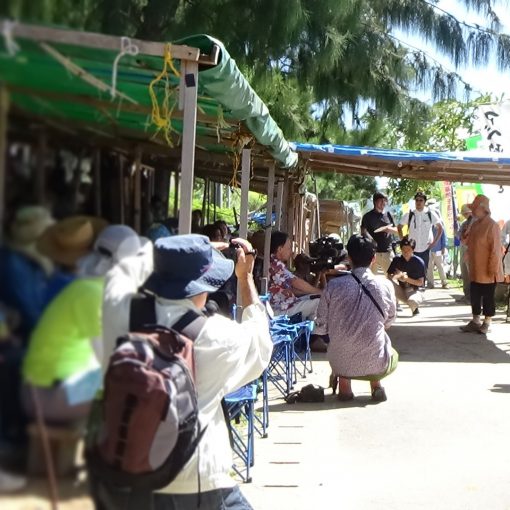 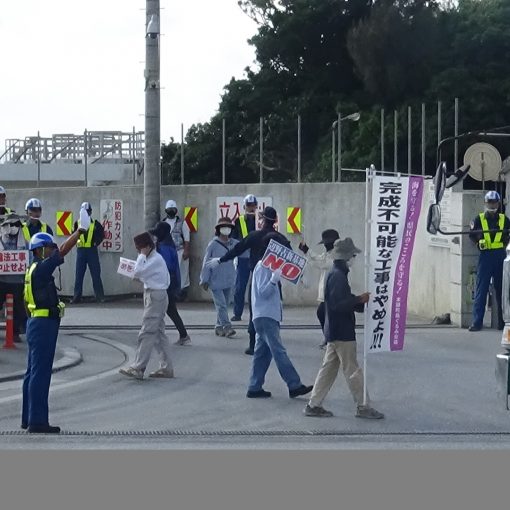 The Okinawa Defense Bureau developed a new method to speed up the unloading of earth and sand. The Committee on Environmental Monitoring, […]