Prime Minister Shinzo Abe made a false claim about the land reclamation work in Henoko Bay, part of the relocation of MCAS Futenma (located in Ginowan, Okinawa) to the Henoko area of Nago, while on a political discussion show this past Sunday, January 6. The prime minister stated, “The coral in the landfill area is being relocated,” however the reality is that in “landfill zone 2-1,” an undersea region in Henoko where land reclamation is currently taking place, no such relocation of coral is taking place.
In the total land reclamation area, there are approximately 74,000 colonies of coral that need to be moved, however as of January 7, only nine Porites okinawensis colonies in other area had been relocated.
The Okinawa Defense Bureau (ODB) policy was to at first relocate a single colony of the endangered Stylaraea coral from the area near where landfilling was to take place. However, as they would have had to obtain a special permit for gathering the coral, as well as use special equipment that would safely enclose it, the ODB opted for a construction plan that would avoid having to move the coral.
Regarding the prime minister’s statement, Okinawa Governor Denny Tamaki posted on Twitter January 7, “Prime Minister Abe… That was taken from someone’s lecture wasn’t it? That is not what is happening. So, we are calling [your statement] into question.”
Tokyo Keizai University Associate Professor Nami Okubo, an expert in coral biology, said, “His statement is does not accurately represent the situation. Even if the coral is relocated, the survival rate is low, and furthermore it does not make for good environmental conservation policy.”
The ODB is also only targeting coral of one meter in size or more for relocation, anything under that will not be relocated.
Regardless, the nine colonies relocated are not coral from “landfill zone 2-1.” Moreover, none 39,000 colonies of coral that the ODB has targeted for relocation in their permit application submitted to Okinawa Prefecture are located in “landfill zone 2-1.” The permit has not yet been granted by the prefecture.
Abe also stated, “Endangered species along the coast will also be sifted from the sand and moved to another part of the coast.” While there are examples of the ODB collecting shellfish and crustaceans by hand and moving them, there does not seem to be any evidence that they are being “sifted from the sand,” and moved.

October 19, 2019 Ryukyu Shimpo On October 17, it was confirmed that the sea surface around Oura Bay, where construction work for […] 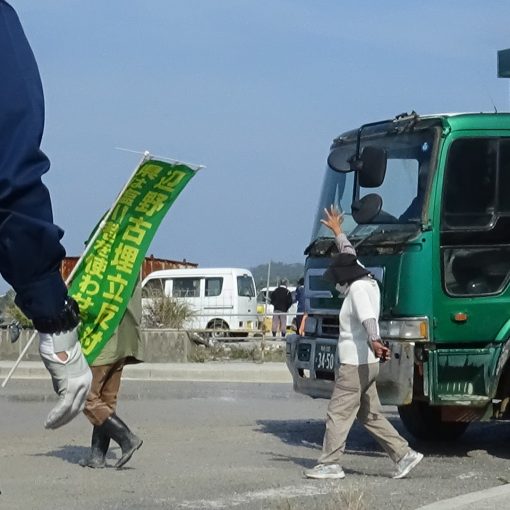 (In front of the Gate) The trucks loaded with construction material arrived at 10:00am, one hour behind the scheduled time, probably due […]