(In front of the Gate)
Okinawans are getting more agitated with the Administration that forcibly proceeds on dumping while the Prefectural Referendum is in the process. On the first day of early voting for the referendum, the number of votes posted had reached more than twice that of the gubernatorial election held last year.
Three times the day, a total 335 truckloads deliveries were made. It seems that they are in a hurry to complete N4 seawall, but the soft foundation reaches 90m depth in the water. The work to improve the foundation will be the first of its kind in the world, and many more obstacles seem to be in the closet.

(In front of Ryukyu Cement Pier)
In our protest demonstration, several of us drove very slowly in front of the dump trucks. When one car stopped in front of a dump truck, the driver of the protest car was surrounded by police and asked to show a driver’s license. Looking at a long line of trucks, I could share their frustration.
The belt conveyer was again in trouble, and the deliveries were closed by 3:30pm. The total of deliveries for the day was 506 truckloads.

(On the sea in Oura Bay)
One boat and 7 canoes were out on the sea. All canoes went over the floats toward N4 seawall construction site. One reached very close to the crane and successfully stopped its operation for about an hour.
Due to a bad weather, the protest on the sea for the day was finished by noon. 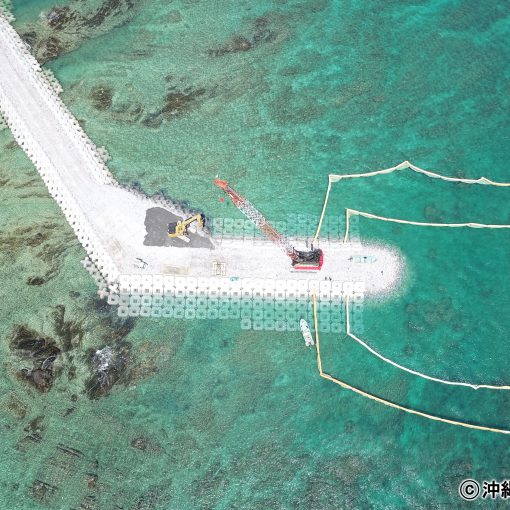