(In front of the Gate)
In conjunction with the canoe team’s Intensive Action on the Sea, approximately 40 people gathered at 5:00am to prevent the construction workers’ cars from going inside the Gate. Anticipating more protestors’ participation, the riot police force had dispatched 100 men ready to deal with the protestors. They detained the protestors in a temporary detention area to let over 100 cars of the workers pass the Gate. One lady was arrested on a charge that she hit a riot police man on head with a placard.
At 9:30am, approximately 350 people walked to the 3rd gate while shouting, “Do not destroy the sea!” In the afternoon, the number of participants reached 600 who gathered on Henoko Beach and sent cheers to the canoe team on the sea by repeatedly calling aloud.
“We do not give up!”
“We will stop the base construction!”

(On the sea in Oura Bar)
At 9:30am, 9 boats and 44 canoes held placards and rallied close to the area where depositing earth and sand was scheduled to begin. Through a loudspeaker to the Defense Bureau staff, protest slogans were repeated.
“Okinawans will decide the future of Okinawa!”
“Do not build a base on soft seafloor and active faults! It is too risky!”
After the conclusion of the meeting on the beach, they resumed the protest on the sea in the afternoon. Past 2:00pm, our canoes and the Coast Guard were glaring at each other. When 20 canoes went over the fences into the restricted area, they were immediately detained. Past 3:00pm, depositing earth and sand at two points in the zone 2 was begun. Mr. N in his 50s participated the rally with his canoe said.
“Tears came to my eyes when I saw dump trucks made deliveries one by one. I need to act now for my daughters and for the next generation.”

(In front of Ryukyu Cement Pier in Awa)
No delivery was made today. 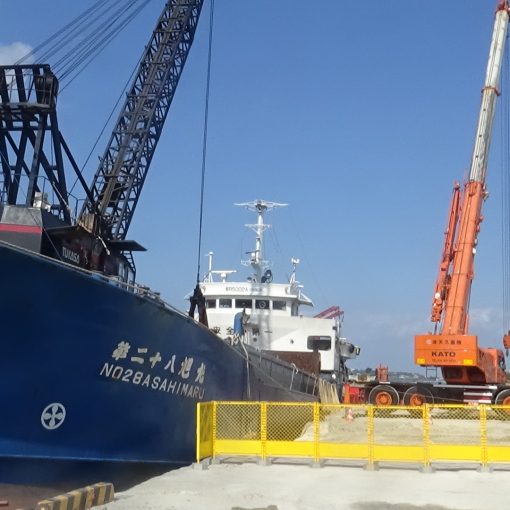