It was clarified on Dec. 7 that low-frequency noise caused by flights of Ospreys, measured at Midorigaoka Nursery School next to MCAS FUTENMA, “the most dangerous U.S. military base in the world” (commented by Mr. Rumsfeld, former U.S. Secretary of Defense), had been above “the acceptable limit for environmental protection”. Also reported was that the noise levele has not been decreased at all in 2 years since the incidence of a part being dropped from the U.S. military aircraft to the nursery. The low-frequency noise measured at the nursery was 20 to 25 dB over “a reference value of mental and physica discomfort complaints”, and its effects on the children are of great concern.
It was agreed in 1996 between the governments of Japan and U.S. that MCAS FUTENMA would be returned to Japan in five to seven years. However, the government of Japan has not made efforts to urge the U.S. government to return Futenma base to Japan claiming that an alternative base in “Henoko” is not ready yet.
However, an accident in the “most dangerous U.S. military base in the world” surrounded by residential homes, will surely bring about devastating effects. MCAS FUTENMA should be immediately returned to Okinawa.

（In front of Camp Schwab Gate）
In the heavy rain, about 30 protestors, dressed for rain, started the sit-in in front of the gate. They were removed by the riot police in 20 minutes, and 67 trucks including concrete mixer trucks entered the base. Even after that, the protetors continued rallying against the truck drivers and the employees of the Okinawa Defense Bureau, saying, “Stop immediately the illegal construction!” or “Don’t destroy Oura Bay!” The truck deliveries were made at noon and 15:00 p.m., and total of 159 vehicles delivered the material.

（On the sea at Oura Bay）
Protest was cancelled due to bad weather.

（In front of Ryukyu Cement Pier at Awa）
Through the driving wind and rain, about 30 citizens continued the protest. Dump truck drivers , being worried about skidding accidents, entered the pier one by one in a careful way. Therefore, a national road was continuously jummed with 40 or more trucks. Such a bad weather, curiously enough, seemed to energize the participants, who sticked to the protest more than usual. They walked all day, holding a placard and showing their will of protest near the entrance and exit of the pier. 508 truckloads of landfill materials were loaded to carriers, and two carriers left the pier, heading to Oura Bay.

（Shiokawa Pier at Motobu Town）
It had been raining heavy from early morning. Two protestors stood in front of the dump trucks, blocking the work which had started at 7:30 a.m. After a while, five or six persons joined them, but all of them were removed by the riot police who arrived at 8:30 a.m. Reasons were unknown, but the morning work ended one hour after the start. It restarted at 13:00 p.m. About 10 participants continued the protest, but they were easily removed by the riot police. The total of 244 truckloads of soil/sand were loaded to barges. All protestors were drenched to the skin. 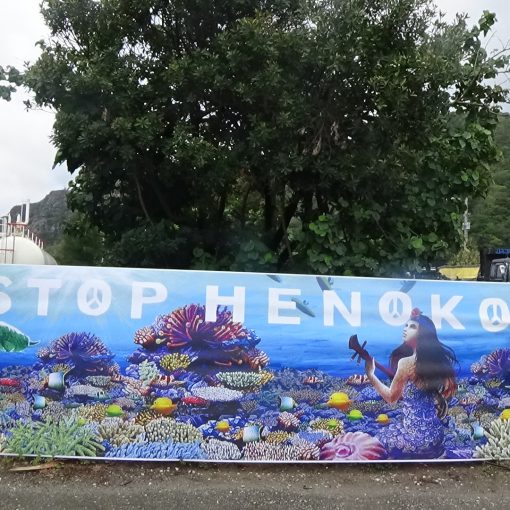 （In front of the gate） About 260 dump trucks carried the material, dividing into three times, from the morning. The material may […]