The court made another unjust ruling to please the Abe administration. Okinawa’s lawsuit had requested cancellation of the decision made by the Minister of Land, Infrastructure and Transport to cancel the Okinawa Prefectural Government (OPG)’s revocation of permission for land reclamation, based on the claim that the Minister’s decision is illegal. On March 26, The Supreme Court dismissed it at its final appeal.

After the OPG revoked its previous land reclamation permission in 2018, the Okinawa Defense Bureau (ODB) lodged a formal objection based on the Administrative Appeal Act (a law specifically designed to allow aggrieved citizens to seek redress from a recalcitrant state) by pretending to be just like a “private person” who seeks to redress the wrongdoing by the OPG and asked Land Minister to make the decision. The OPG claimed that the ODB abused the law and the decision by the Land Minister to cancel the OPG’s revocation was illegal as the minister was a member of the Cabinet who was the party of the dispute. Many constitutional scholars and lawyers had raised questions on these matters.

In October, the case was first seen in the Fukuoka High Court Naha Brunch, which rejected the OPG’s claim, deciding that the central government could take the same position as a private person. The Supreme Court’s decision upheld the High Court’s ruling. Under the Abe administration independence of the three branches of government; legislative, administrative, and judicial, a steady rock principle of the Constitution of Japan is collapsing.

(In front of Camp Schwab Gate)
Yukio Hatoyama, the former Prime Minister of Japan, visited the tent. He entered his prime minister career in 2009 when the opposition parties worked together and defeated the ruling coalition of Liberal Democratic Party and New Komeito Party in a sweeping victory in the general election. During the election he pledged to relocate U.S. Marine Corps Air Station Futenma somewhere other than Okinawa. However, within one year after the election, he blindly accepted explanations by Foreign Ministry officials, withdrew the base relocation promise, and accepted the plan to relocate it to Henoko. He betrayed Okinawa with this decision. Regretting that it was a “big mistake” he has visited Henoko many times after his resignation from the position of Prime Minister and apologized for his wrong decision. It was around 2 years ago that the people at the tent started to accept him. Fumiko Shimabukuro, 90, who once said to beat him up if he comes closer to her, greeted him with a smile today. Mr. Hatoyama established a foundation 7 years ago to advocate “peace in East Asia based on the friendship” and has had lectured on it at many places. He agrees with All Okinawa in the agenda of “down with Abe” and “no construction of a new base at Henoko.” This former prime minister stands on the same side with us. We expect him to spread his anti-Henoko base construction message widely locally and internationally by capitalizing on his name value.
On Friday, 195 truckloads of construction materials were brought in.

(In front of Ryukyu Cement Awa Pier)
Approximately 20 people protested at the entrance and the exit of the pier. We asked the drivers of the trucks who made left turn to get in, to stop it as it’s dangerous. But they ignored us and kept making left turns to come in. At 2pm 20 people visited the Okinawa Prefecture branch office in Nago to call for not exteding the permission for Ryukyu Cement Co. to use the old pier. 698 truckloads of earth and sand were brought in. 726 truckloads were loaded to 3 cargo ships.

(Shiokawa Pier at Motobu-cho)
Six people stayed there whole day protesting by walking across in front of dump trucks. The pier was filled with smell of car exhaust, which made them headache. 453 truckloads of earth and sand were loaded to 3 cargo ships. 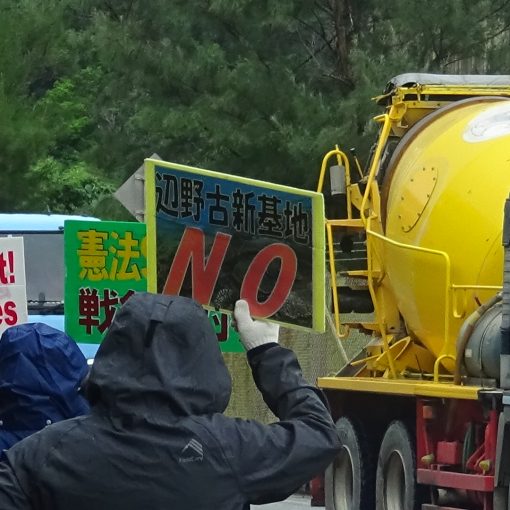 In the current Diet session, two “Sugita”s are likely to shake the floor. “Women can tell lies as much as they want,” […]

（In front of the gate） Though an intensive action is scheduled every Wednesday, most protestors went to Awa to join the protest […]