About 30 members of Naha Shimagurumi (Naha chapter of Island-Wide Conference) staged a sit-in in front of the gate, making a protest. The protest came alive with songs and jokes at the site, led by women, this day. The riot police officers seemed more relaxed to ask the protesters to move. They must be impressed with the appeal of the women who reminded them of their mothers or grandmothers. At least I hope so.

A total of 168 vehicles delivered the material.

About 25 members of Shimajiri Shimagurumi Area(Shimajiri chapter of the Island-Wide Conference), divided into two groups at the entrance and exit of the pier, respectively, made a protest. At the entry, the riot police led by commander H pushed the citizens out to the pavement to place strict control over the protest movement. The protesters raised their voices to criticize his rougher action.

On the sea, a team consisting of 8 canoes stuck to a carrier, delaying its departure by one hour or more. The loading soil and sand finished at 14:00. They loaded 426 truckloads of earth and sand to two carriers. The loading work tends to close earlier than before, maybe because there are not many empty carriers available.

Six members of Motobu-Cho Shimagurumi (Motobu chapter of the Island-Wide Conference) continued the protest. Probably because only a small number of barges are available, dump trucks seemed to deliver soil and sand more slowly than usual. The work ended with the 3rd carrier due to high waves. They loaded 391 truckloads of earth and sand.

It seems that the number of security guards has decreased at the pier. They say that recruitment cannot catch up the number of guards who quit these days. The guards stand all day long and sometimes shout in a loud voice, “Dump trucks are passing !” It is no wonder that they got bored and resigned one after another. However, relatively good payment is attractive for middle-aged and older people who are out of a job due to the COVID-19, so that recruitment is not so difficult. The national tax unlimitedly covers the cost; the budget for security guards per day is over 30 million yen. 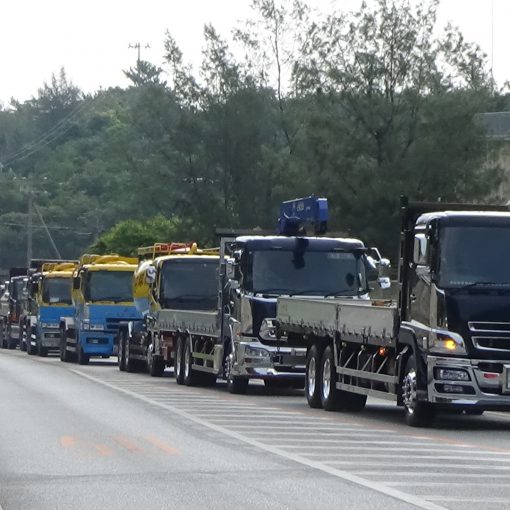 (In front of the Gate) There were 10 sit-in participants at 9am, 30 around the noon-time. Then they left the site to […]