The opinion statement on the design change by the Okinawa Defense Bureau on the construction of the new U.S. base at Henoko, which Taketoyo Toguchi, the Mayor of Nago City, planned to submit to the Okinawa prefecture, was voted down.  During the Nago City Council, which lasted until after 7 pm, 13 City Council members of All Okinawa Coalition, one after the other, attacked the problematic issues on the opinion statement and the attitude of the Mayor. The City Council consists of 12 members of the administration party (not including the chairperson) and 13 opposition party members. The result of the vote was obvious beforehand.

Even so, the opposition party members kept attacking the Mayor’s opinion statement, which said “no objections” in only three sentences, claiming that the Mayor abandoned his responsibility to protect the life and environment of the residents of Nago City. They mentioned that the Ex-Mayor, Susumu Inamine, took more than three months to prepare a similar opinion statement. They insisted that the City Council should not vote so quickly without carrying out a thorough discussion. The opposition members also criticized the Mayor for asking questions regarding the opinion statement not to the Okinawa Prefectural Office but directly to the Ministry of Land, Infrastructure, Transport, and Tourism.

Another attack was that the names of the place written in the statement differed between those submitted to the City Council and the Okinawa Defense Bureau.

When the Council voted down the opinion statement, a big applaud erupted within and outside the City Council chamber.  Before this vote, the Council had passed the bill proposed by the opposition members demanding to stop altering the Mijagawa river course.

Some protest members at the Camp Schwab gate volunteered to drive around with a loudspeaker across the Nago city from 10 am before the City Council meeting began. Claiming that the Mayor revealed his position to approve the land reclamation for the new base, they encouraged the citizens to participate in the protest rally in front of the City municipal office.

The protest with 113 people started a rally at noon. When the opposition party members pledged to oppose the Mayor’s opinion statement at the Council session in progress, the protesters applauded enthusiastically.

At 8:30 am, the temperature was 16 degrees Celsius. The wind was chilly for the people in Okinawa. Fifteen people joined the sit-in protest. A bus carrying Shimagurumi Naha (Naha chapter of the Island-Wide Conference) members arrived a little after 10 am, and the participants increased to 30 people or so.

Mr. Kazuo Senaga, the leader of the day, asked the protesters in the sit-in to keep the distance from each other as best they could because of the recurring spread of the  COVID-19 in Okinawa.  The riot police also avoided physical contact with the participant and persuaded them one by one to move away. Until when do we have to do this style of protest?

A total of 226 trucks brought in the construction materials.

Approximately 20 people protested at the entrance and the exit of the pier. Chief H of the riot police appeared again and reinforced the aggressive control. The riot police ordered to stop Go-Go Drive’s cars driven by two women and interrogated for a long time. They ordered a woman in her 60s to open the car trunk for examination. Another woman in her 50s refused to show her driver’s license to the police, as she thought the reason not acceptable. They confined her in her car for two and a half hours. H Chief, obviously that was overkill.

Five members of Motobu Shimagurumi (Motobu chapter of the Island-Wide Conference) kept protesting. Four barges were loaded with 536 truckloads of the earth and sand. 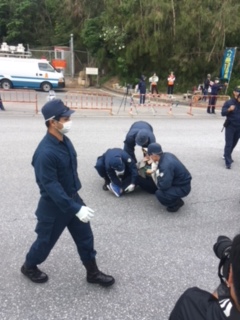 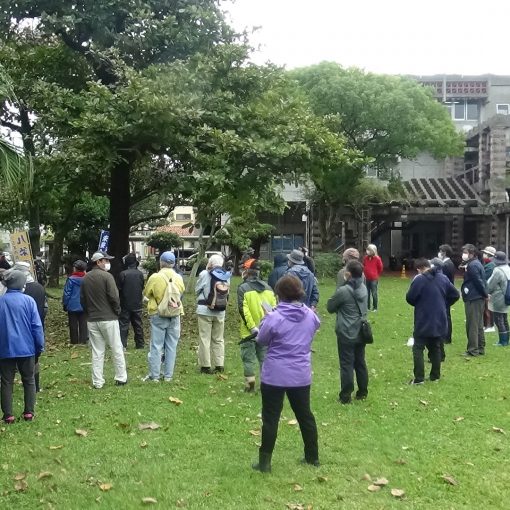