(In Front of the Gate)
Days of the heat continue. The direct sunlight stings so strongly into our heads that we can hardly stay in the sun for an hour. The protesting citizens can move around, but the guard men from a private security service company must be standing still. They must be enduring unbearable discomfort beyond my imagination. I sympathize with them although it is their work.
Four persons graduated from Kochi University joined our protest rally, and spoke up into a microphone.
“Dum trucks go home!”
“Do not help the illegal construction!”
All day long, approximately 30 people participated in the rally.
Deliveries of 137 truckloads were made into the base.

(On the Sea in Oura Bay)
One boat and 7 canoes went out on the sea. It was a clear blue nice day.
We confirmed that earth and sand were transferred from the cargo ships to barges, and appealed through a loud speaker.
“Do not destroy Oura Bay!”
“Do not dump earth and sand over the corals!”
Due to a malfunction of a cargo ship, the rally was cancelled in the afternoon.

(Protest Rally in front of the Piers)
Loading cargo ships was carried on in Awa and in Shiokawa. The members of “GoGo Drive” campaign rallied on the road leading to the Pier in Awa to delay the deliveries.
One of the guard men got heat stroke and transferred to a hospital by ambulance. It is hot! Ice cream sent to us as a care package melted away in a short time. We took turns and kept on rallying to the dump trucks in front of the Gate. The police men said caringly,
“Take it easy. It is too hot!”
The earth and sand loaded by 5:00 p.m. filled one cargo ship. 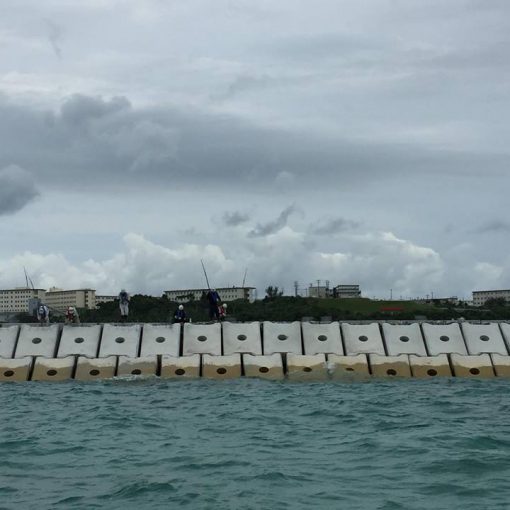